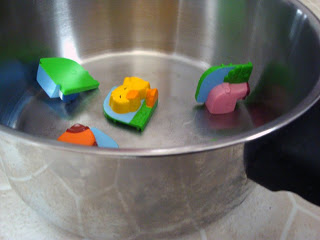 It’s so interesting to watch Oscar learn. I am constantly having to remind myself that something that looks like misbehavior can often be simply explained as scientific experimentation.

Lately, Oscar has been interested in trash cans. Not all trash cans. Just the ones with lids. Fun swinging lids that spin when you hit them just right (provided the trash isn’t too full). I mean what kid wouldn’t want to play with that? Unfortunately, this means the diaper trash can and the kitchen trash can. Gross and double gross. We are teaching him that we don’t play with the trash. But as you know if you are a parent, repetition and consistency are key.

Fast forward to yesterday, when I sat on the floor to show Oscar how to put all of his magnets in his pot. He has his own stockpot with a lid that we keep down on his level. I thought it would be a good way to start teaching him about inside/outside and sorting. Right now all he wants to do is take them OUT of the pot. I put them in, he takes them out. And so that was that, no worries. We had fun and that was enough.

Until this morning. Suddenly, he got it. And what better way to experiment than with the trash. Poor Elmo bit the dust. With purpose, into the trash he went. Followed by UH OH UH OH UH OH! At first I went through the normal no-no speech about not playing with the trash. A few minutes later, one of the magnets met his doom. And later, when I handed Oscar a treat to give to Krusty (as he often does), he marched right over to the pot and threw in the treat! And come to think of it, several things have ‘gone for a swim’ lately too! Most recently a CD that ended up in the toilet.

AHA! Now I get it. He is LEARNING. Neat! Now obviously we have some course correcting to do, but it sure is fun to watch those dots start to connect. And if I have to wash a few toys in the process, I guess I can handle that.

And then he was seven

Confessions of a pregnancy test junkie

A Big Hero 6 review for parents

Into the Mist is a great way to...

You don’t know the power of the dark...

Adjusting to life with two kids. Now with...

Make your own Humpty Dumpty with leftover Easter...

Yeah… That's going to be around for a while.

We were having an issue at my 3yo's daycare with things disappearing. One of his blankets just vanished and I was furious that another parent would take my kid's blanket. Then it happened again… at his class' holiday party.

I lost it. I was walking around mumbling about how selfish people are, taking something they know isn't theirs, how this was such a special blanket my boy got as a baby, how I was just so disappointed in everything… that's when the teacher came back into the room after watching the class' video tape. She walked right to the trash and pulled out his special blanket.

It apparently sounded like a fun idea to throw away his stuff instead of walking it over to his cubby. I'd count that in the top five biggest public embarrassments of my life.

So yeah… watch that trash. Ever since the blanket discovery, we're fairly sure we know where all his plates, silverware and other little things have gone… 🙂

Oh wow that's a great story! Thank goodness for video-tapes aha. At least you got the blanket back 😉

we've lost many things. permanently. to the trash can. lesson learned – be sure to check the trash for valuables before taking outside.

Isn't it wonderful to see them learn – especially in ways we would have never thought!

Unfortunately, my 3 kids are between 7 and 14 and we still lose silverware to the garbage. Grrr!

I hadn't even thought of checking the trash for valuables. Daniel has become pretty helpful at throwing things in the trash that we ask him to. Every now and then he just can't resist trying to take the rim off the can.