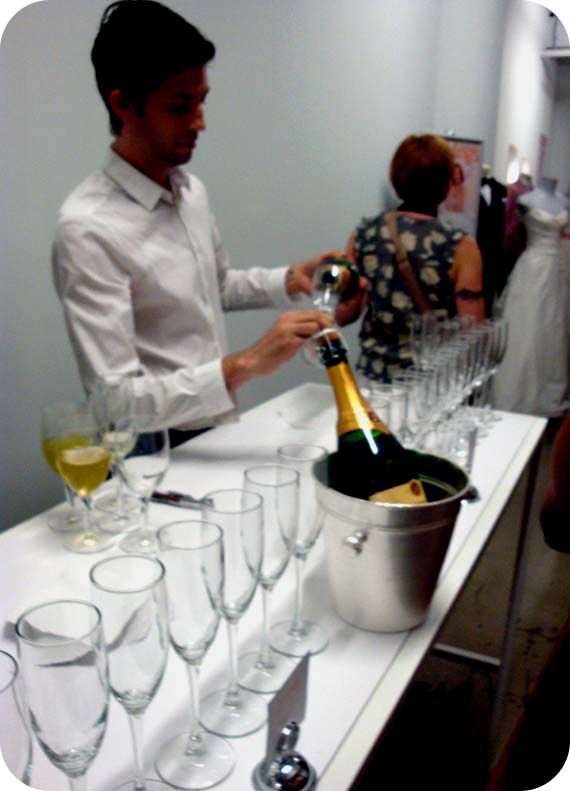 champagne at the Martha Stewart HQ

Ahhh what a fun post to write! Since this was my first BlogHer Conference, I don’t have a frame of reference. But from what I have heard, the parties were insane! I thought I would do one party post, but it’s not gonna happen. I have to include some favorite pictures and there are just too many for one post. Hopefully, multiple party posts will be as fun to read as they are to write (and remember!)

We’ll start with Thursday night. This was my 5 party night.

As in FIVE parties!

I never in a million years thought I could have made it to all of them, but I did and I had SO much fun! The evening started with Cocktails and hors d’oeuvres at Aquavit. This was a quick walk from the hotel (quicker if I wasn’t wearing heels) and so very lovely. My partial sponsor, SeedPower Body Care created a lovely atmosphere and really helped to ease my nerves about being in the City for the weekend. I was able to meet Rebecca and Benjamin Gournay in person and they are just wonderful. I feel so fortunate to have been given the opportunity to learn about them and represent them at BlogHer. Rebecca had been following my blog and knew exactly where my head was. We had a chance to talk and her words meant so much to me. I can’t think of a lovelier woman to work with. She was just beaming with support. 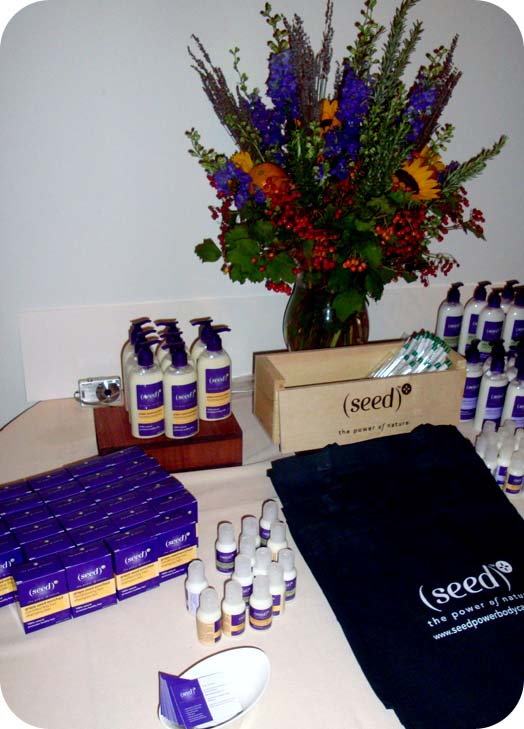 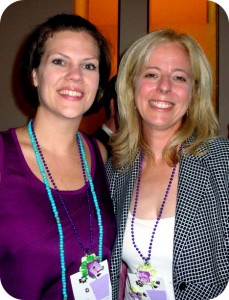 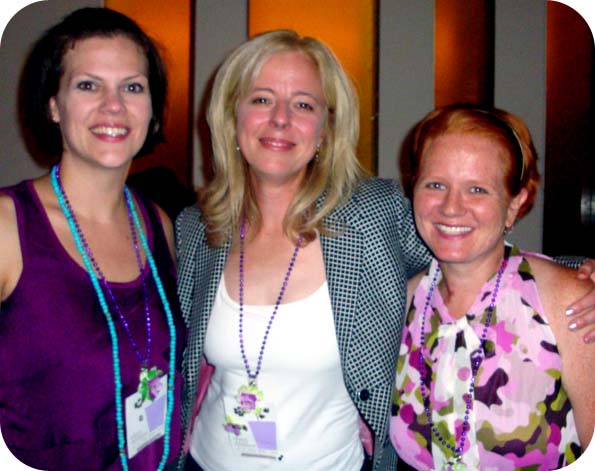 Me, Rebecca (Seed Founder), and Cathy

After the Seed party, Cathy and I grabbed a cab to the Martha Stewart Party. This was the one I was really thinking I would have to miss due to time constraints, but somehow we were about 30 minutes ahead of schedule so we went for it! I was so nervous because I didn’t know what to expect, And cuz you know, MARTHA.

There was a line when we got there and it turned out that it was because there was only one elevator and it could only carry 12 people at a time. Ahh New York. Once we got to the 9th floor, we were led through the main office space for the magazine. You know, Martha Stewart Living? Yeah, that one. In fact, they had brown paper taped over what looked like storyboards or possibly drafts of an upcoming issue. We were like spies.

Who didn’t see anything.

Once we got to the party, there was a long hallway leading into the main room. This hallway was PACKED with people which made it hard to enjoy the amazing spread they had going on. Think Martha Stewart Weddings on speed. There were cakes and cookies and champagne and even a couple wedding dresses and suits on dress forms. Very cool.

Once we got into the main room, there were several booths set up where you could mingle and speak with some of the writers, as well as sample food and drinks. I’ll be honest, this party would have kicked ass if about half the people were there. It was just too full to see anything or get anywhere so we had to make our way out. The view however, was gorgeous. Also, it should be noted that yes, Martha Stewart DID make an appearance. And yes, she was gone about 7 minutes before I got there. 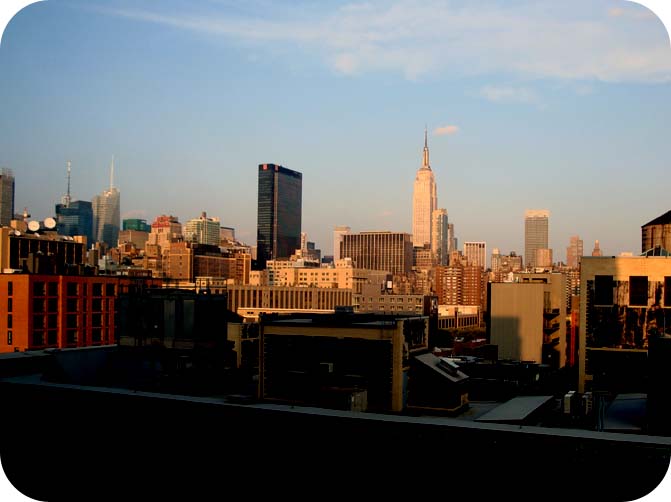 After leaving the party, we made our way to the Social Luxe Lounge. I was SO super excited about this party and really freaked out that I wouldn’t get there in time. This was THE party of last year’s conference and I really wanted to make it a priority because while it was sponsored by Avery and other brands, it was thrown by other bloggers. And that is just plain cool.

As it turns out, I got there at the perfect time because it was also packed earlier in the evening. By the time I got there, however, the crowd had thinned out somewhat. But don’t worry, Ree (aka The Pioneer Woman) was still there.

Yeah, she thought I was awesome. 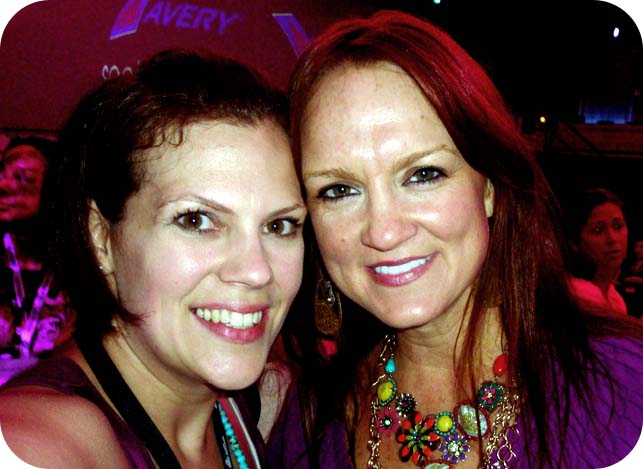 Can’t you just tell by my awkward no-neck smile that I am TOTALLY at ease?! I mean I seriously had to photoshop my armpit out of this picture. Can you imagine? Hey everyone look it’s the Pioneer Woman!

This poor woman was surrounded by readers and fans all night. She graciously took picture after picture after picture. I wasn’t going to bother her, except that I have it on good authority that my friend Martha would do me bodily harm if I didn’t return with proof that we were in the same room. So there. Martha, this neck’s for you! 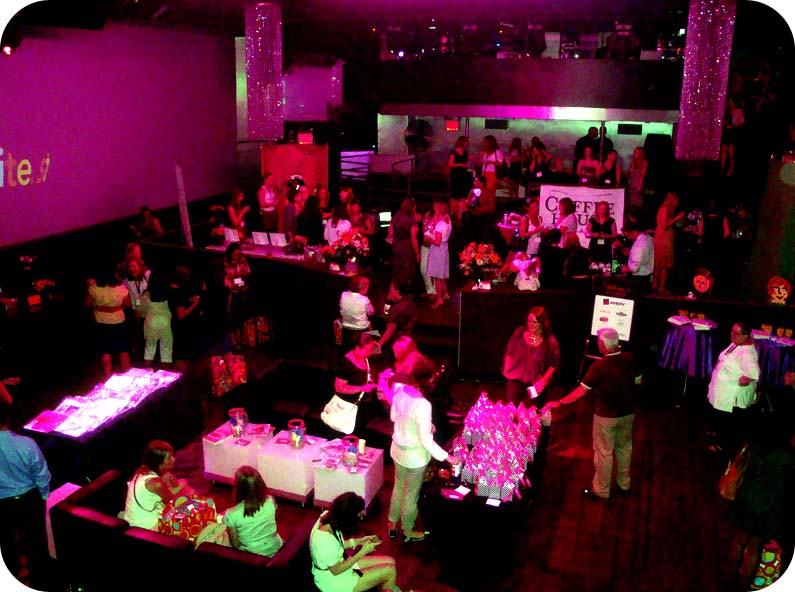 Can you spot Ree in this pic? 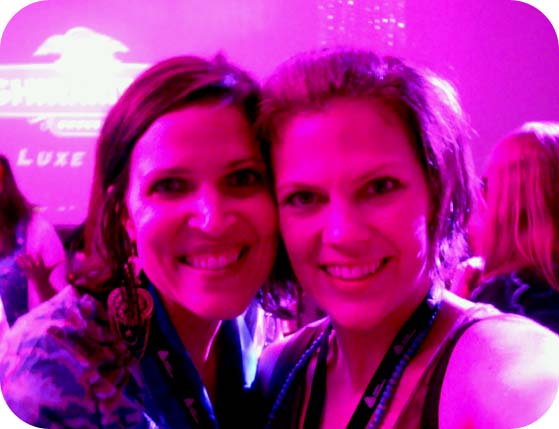 Me with Hostess, Allison of Petit Elephant

The Social Luxe Lounge was held at Arena and it was beautiful. We were totally pampered and I had a great time. I ran into some ladies from Raleigh that I hadn’t yet seen and we all shared our excitement over finally being in New York! We received an amazing swag bag (post forthcoming) and I even got a manicure! These ladies know how to throw a party.

After Social Luxe I went back to the hotel with a few ladies and stopped in to the (BlogHer hosted) People’s Party before heading out. And there was FOOD!!! I kinda forgot to eat dinner, so that was a very welcome sight. We didn’t stay long, but the absolute highlight of my evening (possibly my weekend) was getting to meet the lovely Anissa Mayhew. She was positively effervescent and I think I will save a post just for her. 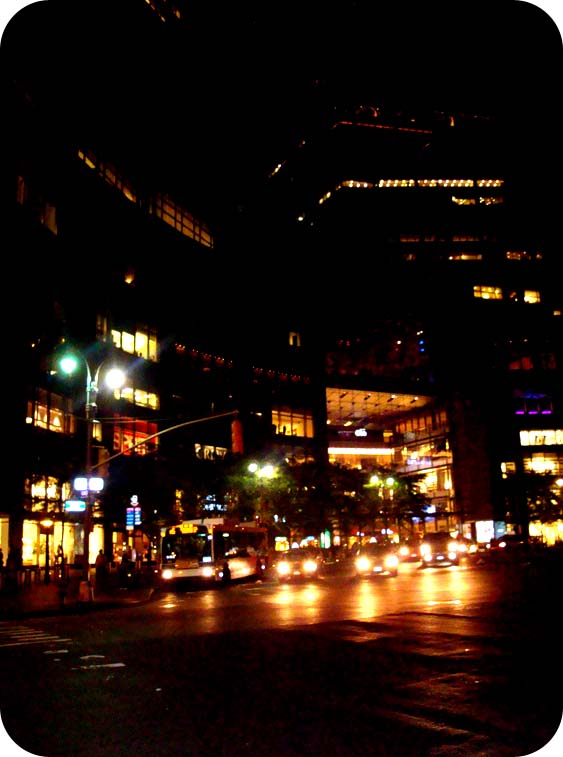 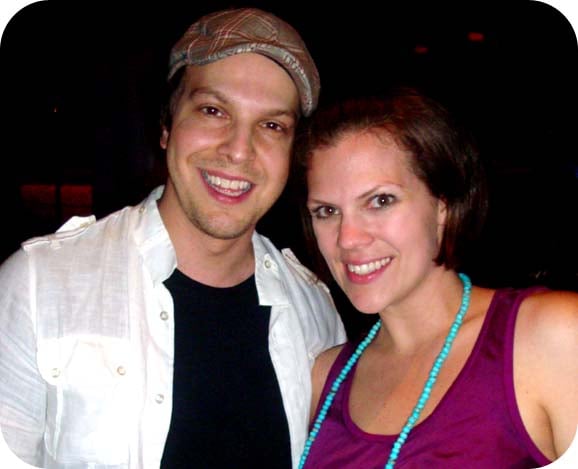 Me with Gavin Degraw

The final party on Thursday night was at the Stone Rose on Columbus Circle. I decided to walk with Fadra and Lauren since it was just a few blocks over. The evening air was actually not oppressive and who can resist walking in the City? This particular party was hosted by Schick Intuition (razors) and featured a private performance by Gavin Degraw! I’ll be honest, I don’t know a lot of his work but he has a new fan in me. It’s hard to beat a guy singing solo with a piano or guitar. 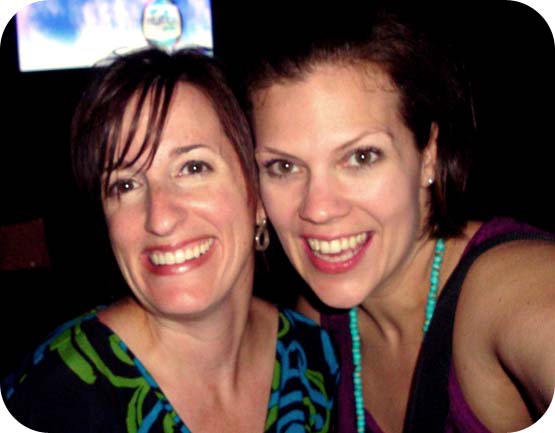 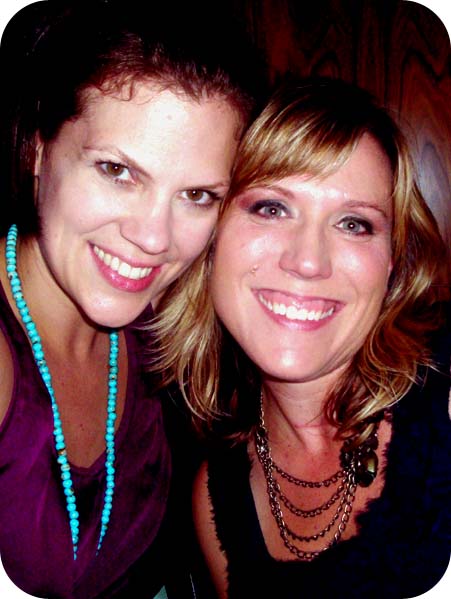 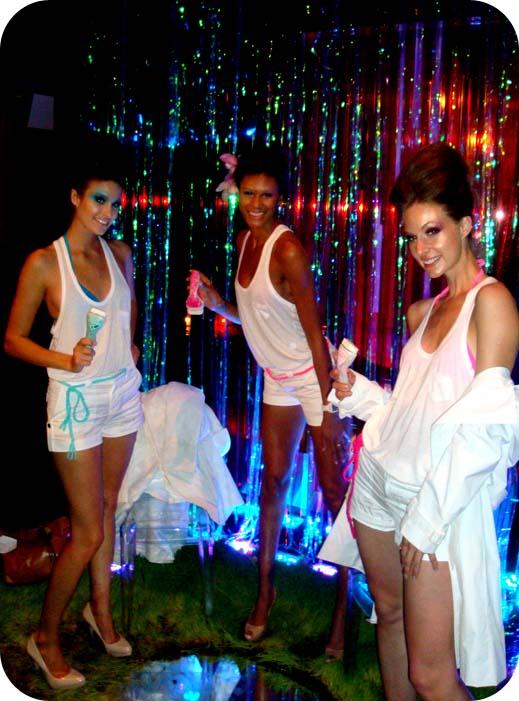 These poor models were shaving their legs all night!

The energy at this party was so exciting and fun. Maybe it was because it was later in the evening, or one of the last parties of the night. But everyone just seemed so relaxed and at ease. The drinks and desserts were delicious and the music was excellent (both live and canned). I laughed so hard with Fadra and really had fun. Even the models were having a good time!

I met a few bloggers that I have been reading, but never met in person. We smiled and hugged and laughed like old friends. And that’s when I knew.

I was officially at BlogHer.

Blogher12: What I wore

Vanessa Lachey is my BFF and I have...

Looking in Looking out

gurl, you know i got u

looks like a rockin time. I don't know how you did it all in one night but I am impressed.
My recent post Sanuk Review Giveaway

and this was just the first night! part 2 coming later today 🙂

[…] stay a while. And don't forget to subscribe to my RSS feed! Thanks for visiting!As mentioned in my earlier post, we were treated to a private concert by Gavin Degraw. It was a really fun time! I think many of […]

I feel like I was there with you after reading your post… what fun to leave mom-world safely at home for a few days and enjoy some NYC nightlife! I'm a little jealous… and you're making me want to go to next year's conference!
My recent post Feeding the Family- Salmon Veggie Patties

Missy, you totally should! And there are several other conferences before then. Check out Type-A-Mom conference. It's next month in Asheville!

Yay, what a fun post! That Schick party was a blast and I'm (finally) putting together a post about my whole chaotic BlogHer experience now. It was so fun meeting you and I hope to see you next year!

it WAS a great party, no!? So great to meet you too!

I'm so happy you made it to our party and had such a good time! Thank you for a wonderful post.

A wonderful party deserves some love! You really rocked it. Thank again!

Teehee, thanks! She was so sweet. I don't know how she does it. And in heels!

Wow Andrea! You had one crazy(and fun) night!! So glad we could meet and than share a cab to the Martha party! Looks like the rest of your night was awesome!!

SO glad we shared that cab. I never could have done it without you!

girl, you did it! although, i had no doubt you could party with the best of 'em. 😉

[…] if Thursday wasn’t enough fun, the party continued on Friday! A lot of the parties had photo booths (like […]

[…] of coffee and stay a while. And don't forget to subscribe to my RSS feed! Thanks for visiting!While I was at BlogHer, one of the parties I attended was the Social Luxe Lounge, sponsored by Avery. This was such a […]

[…] pleasure of attending Social Luxe lounge for the second time. As you may remember, in 2010 I had a sweaty encounter with Ree Drummond, but this year I let her socialize in peace. Like last time, the party was beautiful. But the 2012 […]

[…] if Thursday wasn’t enough fun, the party continued on Friday! A lot of the parties had photo booths (like […]

[…] pleasure of attending Social Luxe lounge for the second time. As you may remember, in 2010 I had a sweaty encounter with Ree Drummond. But this year I decided to let her socialize in peace. Like last time, the party was beautiful. […]