This week we had Calvin “dedicated” at our church. As parents, it’s really more about our commitment to raise him according to what we believe than a statement of faith for him. But I think it’s important to commit to at least trying to practice what we preach, ya know? 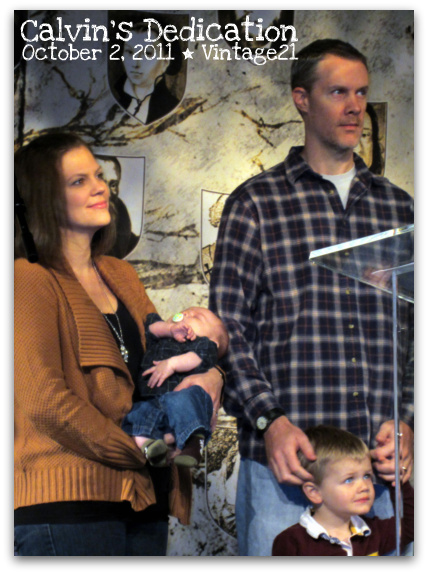 With Oscar, we didn’t get around to it until he was about a year and a half old. So when the opportunity arose for Calvin this month, we jumped at it. There is just something about standing in a room full of people committing to love and lead your child according to the Bible that is so meaningful for us. Yes, it’s just words, but I hope to follow through with actions.

The other day a couple articles from CNN were circulating about how women are surpassing men in achievements and professionalism at an ever increasing rate. Today’s men, statistically, have prolonged adolescence and don’t seem as driven as past generations. I am not going to get all soapboxy about it, but this quote really struck me,

Now, society has rightly celebrated the ascension of one sex. We said, “You go girl,” and they went. We celebrate the ascension of women but what will we do about what appears to be the very real decline of the other sex?

As the mother of two boys, I am really starting to grasp how important my role is (and will be) in shaping them into men with character. Boys are far too often labelled as hyper or apathetic and instead of taught, they are simply tolerated.

I want our boys to dream big and reach for everything that is within their grasp and then some. No, they won’t be good at everything. But I am committed to helping them discover their strengths and excel at them.

I am reminded of my friend Melissa’s post from last year titled, What About the Boys, where she discusses her own desire to raise gentlemen. At the time I was just barely pregnant with Calvin and had no idea that I was carrying our second son. But now as I think back on her words, I can relate to their gravity. This task of raising men is no small thing. I feel so blessed to be entrusted with the responsibility.

As parents, Jerry and I won’t allow our boys to be left behind so we dedicate them. We dedicate ourselves to show them that they will not simply be tolerated, they will be taught. That we don’t have all the answers but we believe in Jesus’ salvation and His unlimited supply of grace. We will show them this love and grace instead of harsh words and eye rolls. We’ll teach them that it’s ok to struggle because there is more value in learning from mistakes than never making them. That when things are hard, we will walk with them and be there for them as long as we live.

This is dedication. And to Oscar and Calvin, this is our promise to you.

Boys need "power" as much as girls | My Family Blog

[...] want them to know that they have the power to be strong and kind and smart and important. I want to teach them respect for others and that they can be gentle without being [...]

Andrea, I loved this post. My little boy is not quite 2 and a half, and I've been thinking a lot lately about making sure we raise him in an environment that is supportive, not merely tolerant of boys. My son is energetic and lively, and I don't ever want that stifled due to other's expectations.

Congrats on the dedication.

Beautiful Andrea ~ my boys are teens and its amazing to see how boys can be collectively put inside a box of expectations that don't apply, from educators and other parents, even doctors. Being both your child's biggest fan and realistic about things that may not be easy are the hardest job any parent has. And when its the children who are rolling the eyes and murmuring their own harsh words, I find myself yearning for a terrible two temper tantrum ~ they make me smile now when I see Moms at Target carrying them like a football out to the care. That I can do =) Your boys are blessed to have your dedication~

Great post, Andrea and congrats on the dedication! This really struck me: Boys are far too often labelled as hyper or apathetic and instead of taught, they are simply tolerated.

I hear that so much and even say it myself "oh he's just being a boy.' And while this is some behavior we should just shrug off, being too apathetic isn't the way to go.

Thanks for mentioning my post-- it's one of my personal faves. :-)