Buffalo Chicken Mac & Cheese
Why the New Perdue Farms Delivery Service is...
Strawberry Pretzel Salad Dessert
Faster way to Fat Loss REVIEW with Q&A
Everything I Love About Wood Watches and a...
Real Talk: Sometimes I Dream of New Kitchen...
A Big Hero 6 review for parents
A trip to the NC Aquarium
Little People Zoo Talkers {Review}
A boy and his Dad….
Home ParentingRaising BoysCalvin Soft Blocks for Baby 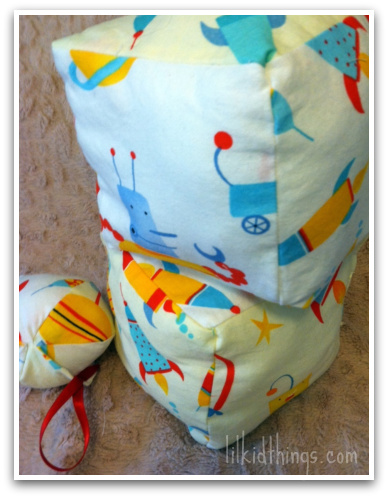 After getting some awesome suggestions on what to give Calvin for Christmas, I remembered that when Oscar was about this age, I made him some soft blocks. They have since been drooled on and played with outside so I thought it would be a good time to make some more.

I used the soft block tutorial over at Smile and Wave and while mine aren’t nearly as professional looking as hers, they are cute and will be something for Calvin to open and chew on. 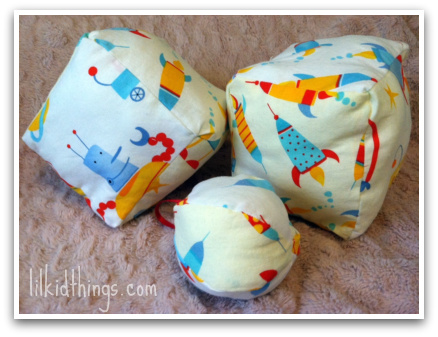 In retrospect, I would rather have used a smaller printed fabric as the robots pretty much got lost in the seams. But this is the fabric I had on hand and it’s been waiting for me to do something with it. Overall I am pleased and hoping the 5 month old won’t notice the rough edges or the fact that I was too lazy to do a blind stitch 🙂

Have you made any of your gifts this year?

How to Remove Candle Wax from Carpet

Adorable Penguin Crafts for the Holidays

The Best Wine Advent Calendar Is The One...

No yet but I am planning to, this is so sweet!

meant ‘not’ yet – fingers are quick today 😀

That’s a great idea. I know my son would love these.

Those are very sweet!