We’ve got a few more days until preschool starts so I planned a few activities to enjoy the final days of summer. Nothing too stressful, mind you. Things like the museum, story time, a trip downtown for ice cream. You know, summer things. This morning was pretty typical. It started with breakfast, a little Angry Birds and our letter of the day, which Oscar made from raisins. 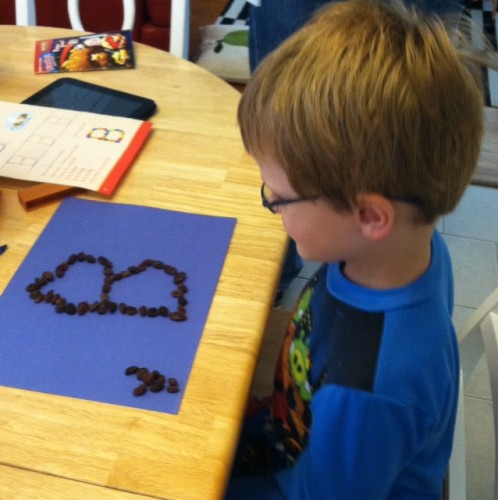 Yesterday, we spent a mostly rainy day indoors waiting for an inspector to come. He never showed up. Today, I was excited to try a new story time that I just learned about last week at a big bookstore. I knew that if things got crazy, they had plenty of other things to occupy my boys, like a train table and a Lego table, and of course an endless supply of books to look through.

We got there about 20 minutes early to play because I thought they might want to blow off some steam before sitting still. They had a great time playing with the trains and as other kids started to trickle in, mine started going in two different directions. Calvin is newly 2 and VERY 2. He is entering the very normal defiant stage where I have to really be on him to keep him in line (and nearby – he’s a runner). With one eye on Oscar, I noticed he wasn’t sharing “his” trains with the kids who had just arrived. I pulled him away to chat about it and take a walk to the still empty Lego table.

After a few minutes it was time for the story to start. We walked back over and noticed that about 15 or more kids and their families had somehow materialized out of nowhere. There was almost nowhere to sit so Oscar found a spot and I stood in the back with Calvin who decided to freak out. He was screaming to get down but when I let him he was out of control, pulling book after book off the shelves. Oscar came to see what was going on despite my telling him to stay seated so again we retreated to the Lego table. I needed time to form a plan of action and regroup. I could feel my temperature rising. I told Oscar that he could sit on the bench but to stay there even if I had to stand up with Calvin. That it was ok for him to listen to the story even if he sees me walking around a little. He said ok and we went back to the benches, which coincidentally were so close together that one had to climb over them to sit down facing the right direction.

As Oscar did this, he accidentally kicked over a woman’s 7ooo ounce iced coffee. I didn’t realize what happened until I heard Oscar repeating over and over, “I’m sorry! I’m so sorry. It was an accident. I accidentally knocked over her drink”. Calvin was still crying in my arms (and would run to the far reaches of the store if I put him down) so I reached over to a miraculously well placed stack of paper towels to hand to the woman (who I think was there with her grandchild) to help clean up. Oscar was already trying to clean and I heard her tersely say to him, “just leave it there. I’ll take care of it”. Maybe I was anxious. Maybe she was rude. I don’t know. All I know is that I wanted to run for my life.

I got Oscar and we started to leave. Calvin was still screaming and at this point I started to cry. I was upset that our outing was ruined. I felt I had failed somehow even though I couldn’t put my finger on why. Oscar was asking over and over why we were leaving and all I could think of was how bummed I would be if my treasured iced coffee treat had been spilled. Plus, that lady could have been way more understanding and there was a part of me that wanted to “kill her with kindness”, not so much in the kindness way. So I guiltily (and somewhat spitefully) bought her a $5 Starbucks gift card. We returned upstairs where Oscar tried to hand it to her and she wouldn’t so much as look him (or me) in the eye. Finally, I said MAAM, excuse me MAAM! And she looked up and he gave it to her. Everything about her face changed and she said, “oh you didn’t have to do that!”

We left the official story time area with a book Oscar chose and went back to the deserted Lego table – my new best friend. I read the book aloud to Oscar skipping sentences and pages so we could finish quickly and get out of there. By this time I was sweating buckets and sick to my stomach. I still don’t know how it all went so wrong but I don’t have any intention of returning for a long time.

Our next stop was Target where of course the boys were laughing and enjoying each other and flirting it up with the checkout clerk (while no one was looking). It was one of those mornings where nothing made sense. And I know the other moms are nodding and understanding and virtually high-fiving. I so appreciate it. I also know that I am sure I could have handled it better and that there is some greater lesson to be learned. These moments always make me wonder what my kids saw. What did they take away from this disaster? Did they even realize it was a disaster?

I am sharing it here not to gain sympathy, but because it’s an honest moment. So was making that B project up there. What would the ups be without the downs, right?

Some moments are better than others, but together they all make us parents; good, bad, and sweaty.

You are so sweet! I wouldn't have even thought to replace the woman's coffee. I would have apologized like crazy and ran far, far away. I'm a chicken butt. lol

Oh, I have been there. It was 10 years ago, but I've been there. And it sucks. And next time someone else will have that day. And the grandma? If you're at an event for kids, it's likely *something* is going to get knocked over by someone. No need to get bent out of shape about it. I'm glad you gave her the card and helped her see how rude she was. Sometimes you just gotta snap 'em out of it. I'm sorry you had such a bad day.