Week in My Life {LilKidThings Day 1}

This week I am accepting the challenge to document my life from Melissa at Adventuroo! All week, bloggers all over the internet will be recording our days as they happen. It started last year as Melissa’s way of capturing the ordinary parts of her day as well as the highlights. I just love that! I don’t know that I will be able to participate every day but I am going to try! I love the idea of looking back on this week a year from now to see how much has changed. I decided to start on Sunday before I realized that everyone else started with Monday. Oopsies! I guess I was just excited! So, on with Sunday. 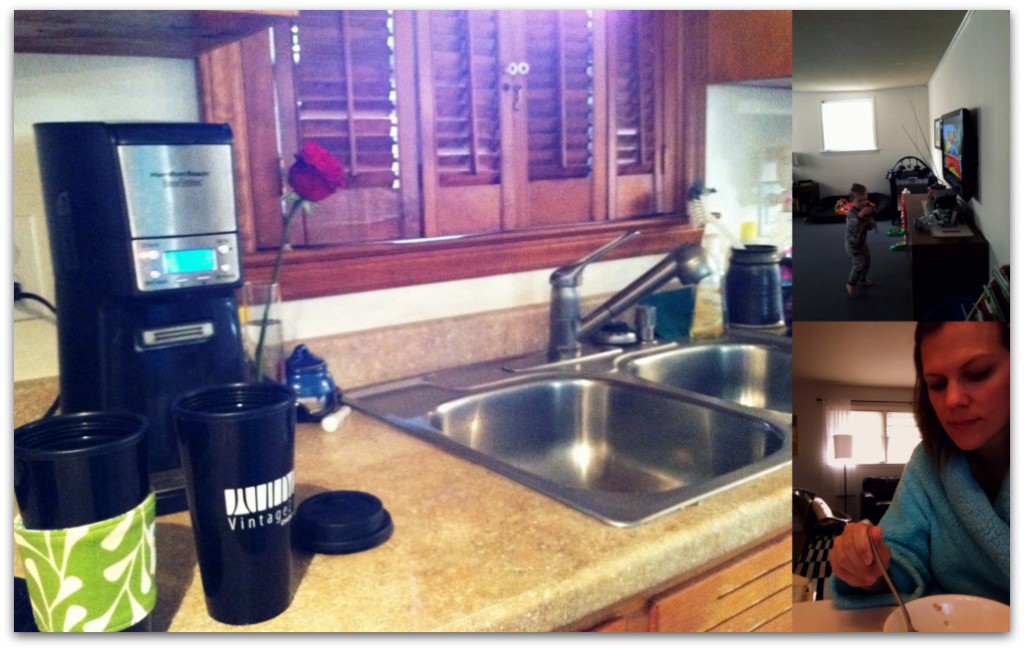 We typically go to church at 9:30 so I was up at 8am with the boys. I nursed Calvin while Oscar ate his cereal and banana. While I got Calvin ready for church, Oscar watched the Wiggles. {Sidenote} In our family we talk about poop a lot. It’s just how it goes when you are the only woman in the house. In fact the phrase “dropped a nug” may or may not have been used in the past when referring to the poop activities of babies and dogs. Well, as I was coming down to change Oscar for church he informed me of the following,

I am VERY poopy! I have a big chicken nugget in my diaper, but it’s NOT for eating!

And then we went to church. 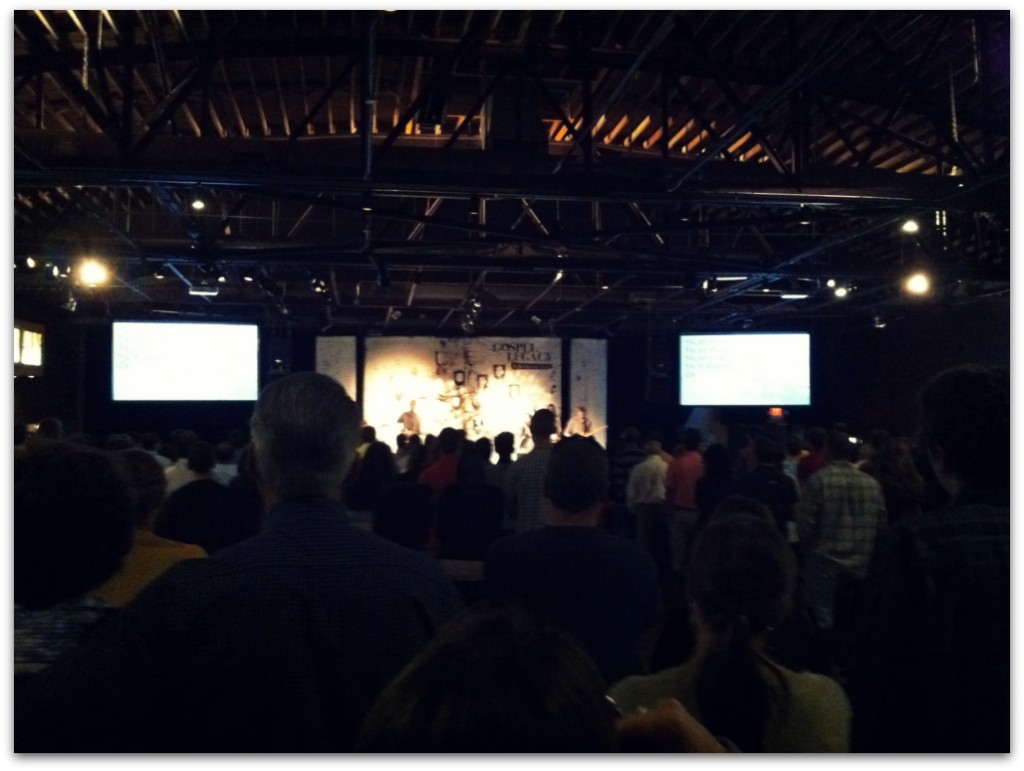 We all piled in the car to head out to Vintage21. Calvin hates riding in the car so he started screaming almost immediately after being placed in his car seat. Oscar didn’t want to stop watching the Wiggles and cried the whole way there, only calming down with the promise of more Wiggles when we get home and maybe even a donut or two at church. We bribe and we are proud of it. Nothing like 2 screaming children to get me in the mood for worship!

I will say that once we were all settled in, the service was really great. Calvin even spent the whole morning in the nursery for the 2nd time! That in itself is huge. It meant that I could really focus on the message and try and reflect.

I totally forgot to document lunch. It was a lot of eating and nursing and getting boys down for naps. There will be a lot of that this week so don’t worry, you didn’t miss much!

Each weekend, Jerry tries to give me a couple hours to get out of the house by myself. This weekend I decided to go to Marshalls. I could spend HOURS in Marshalls. It’s like a big yard sale but everything still has the tags. I found a few things for the house and some jeans for Jerry. I also grabbed a skirt and a shirt for myself and this cute lil orange owl. When I got home, Jerry tried on his jeans and wore them around the house with the tags still on. He is not in many of my pics simply because he was shirtless most of the day and I am sorry, but he is ALL mines. 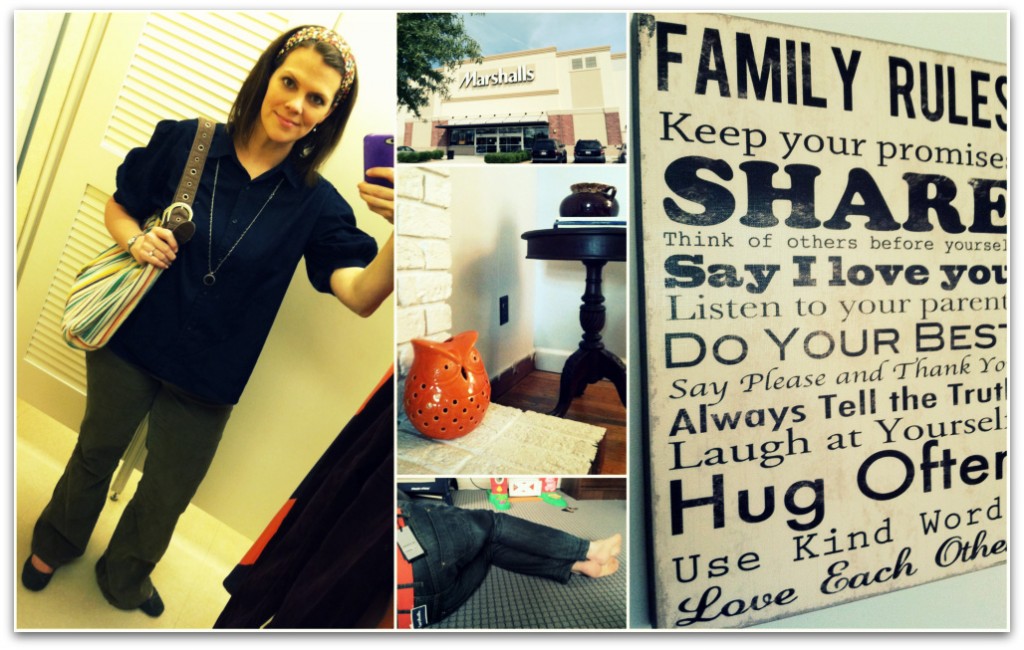 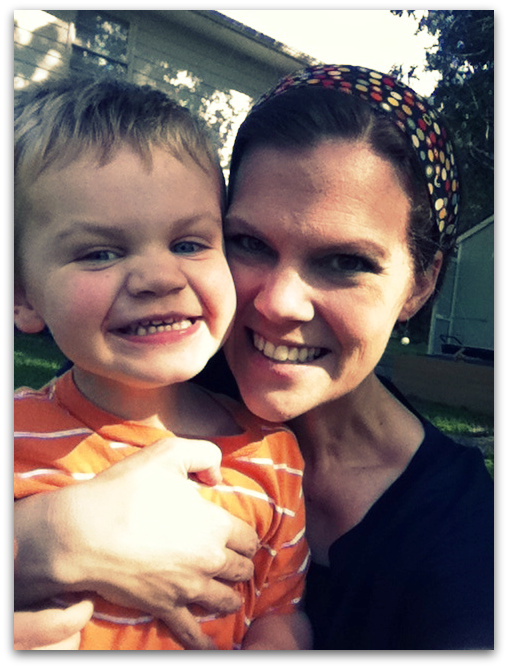 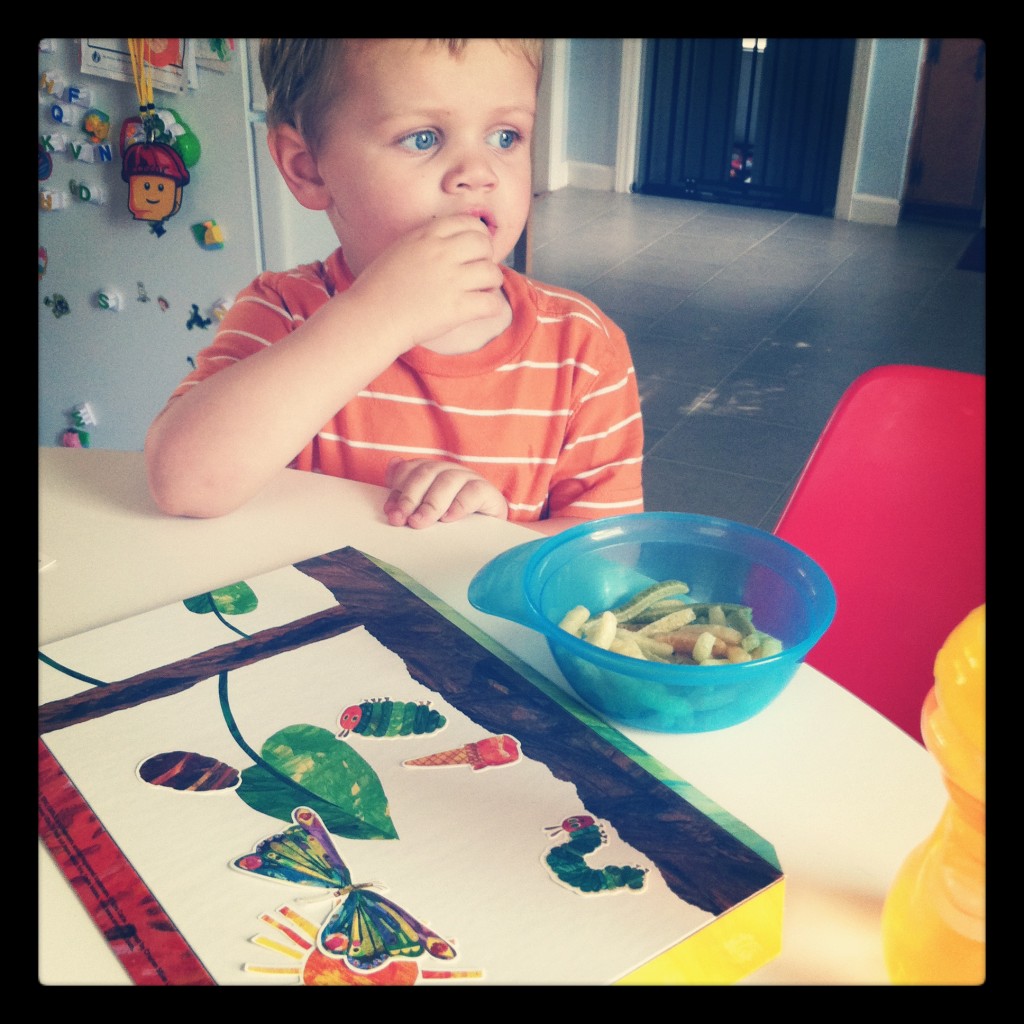 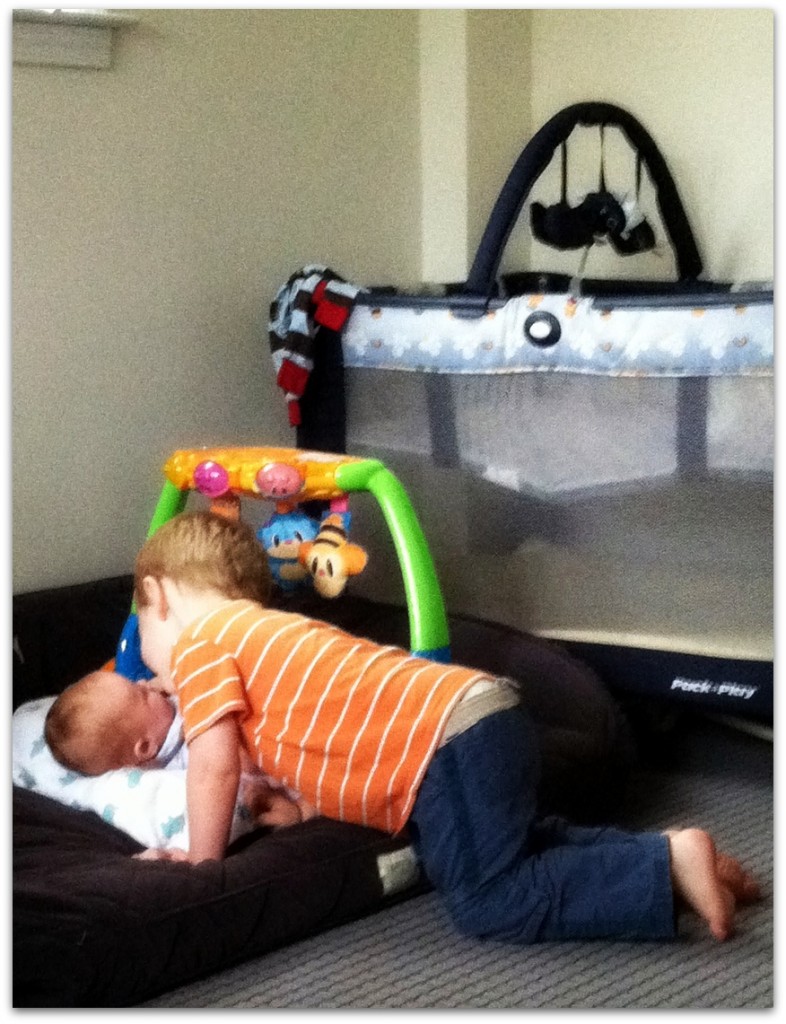 After the boys woke up from their naps we headed outside for a few minutes to hang out while Jerry was doing yard work. The mosquitoes are TERRIBLE. The weather is awesome but they just will not die. It’s so frustrating! We finally came in when Oscar’s hands were muddy and he wanted to wash them. The boy does NOT like being sticky. Dirty is one thing, but sticky is unacceptable.

Jerry came in and took over with the kids while I made dinner. This is my view from the stove at dinner time. One of these days we will get some blinds to go over the kitchen sink. Every day when I make dinner I am blinded by the late afternoon sun while standing at the stove. 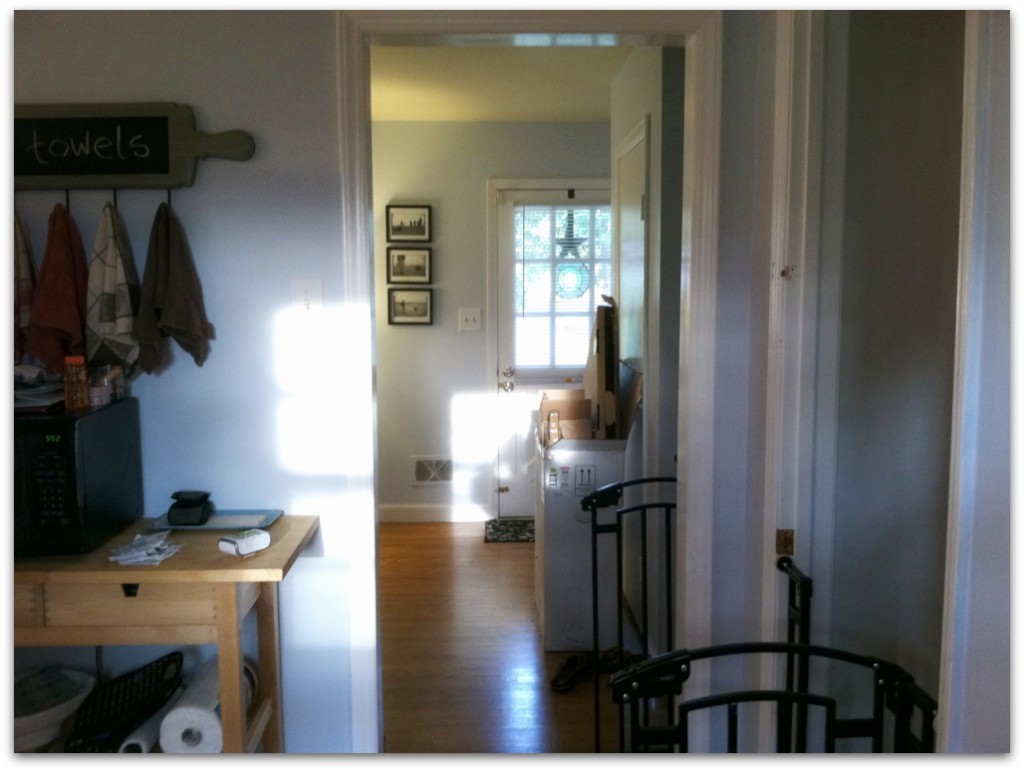 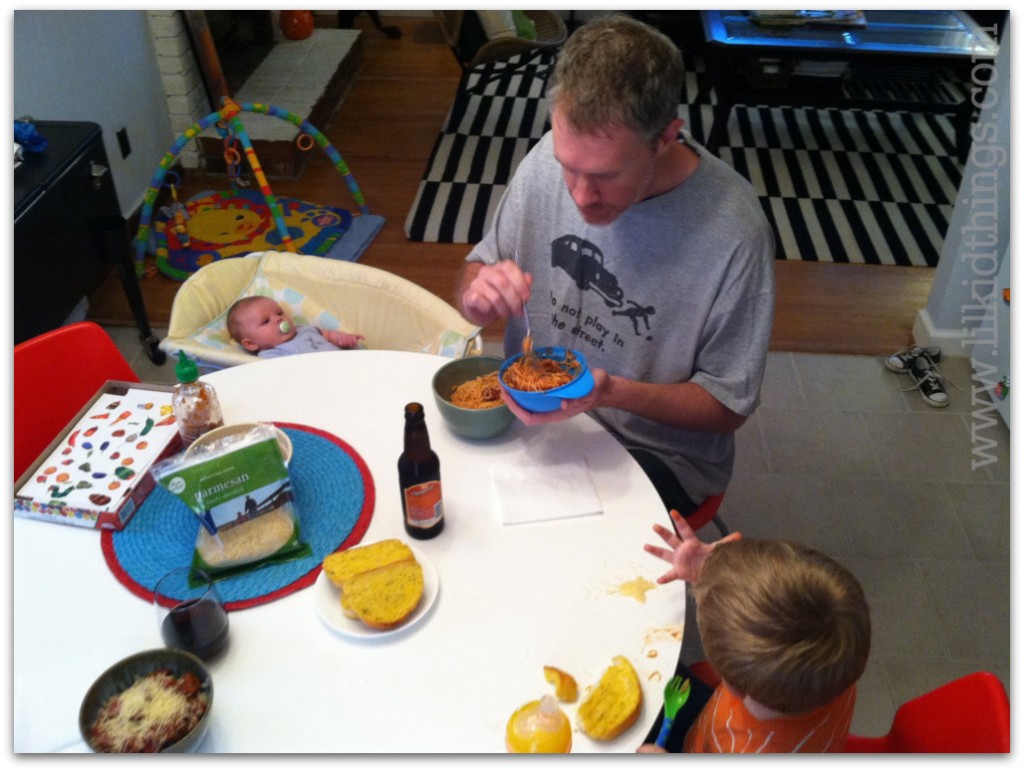 I made sausage spaghetti and garlic bread. We probably eat this meal at least 3 times a month. A definite family favorite! I love that Calvin “sits” at the dinner table with us! We love family dinners and eat together almost every single night at this table. I hope this is something we continue to be intentional about as our lives get busier. It is such a special time!

To this day, Oscar asks Dada if he has a “question” meaning he wants to take a bath. Jerry and Oscar have a game where they run around the kitchen saying bath bath! We’ve documented it on video countless times, but I just LOVE this picture of them running. 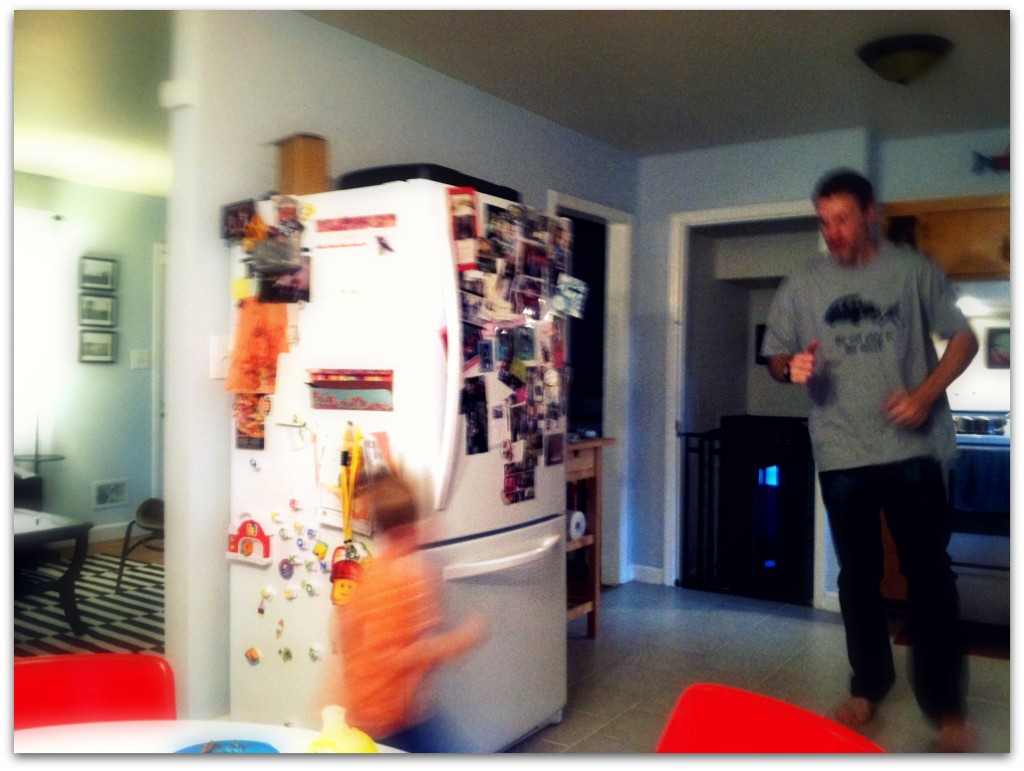 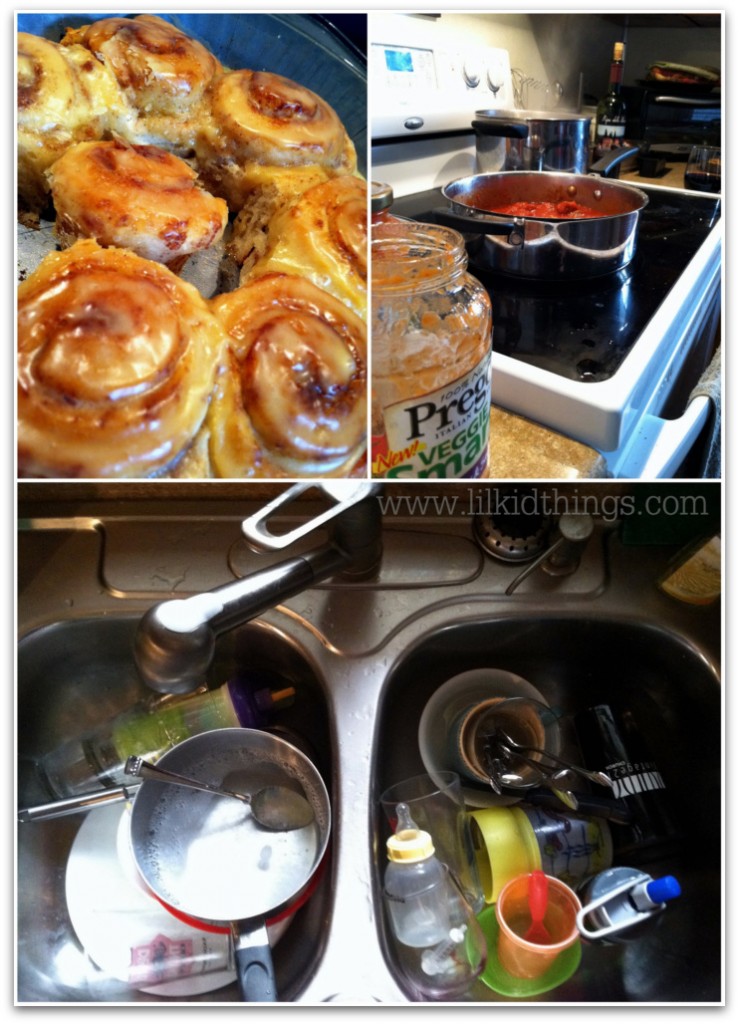 The day is winding down and here is where we divide and conquer. I got Calvin settled into bed and Jerry took Oscar through his routine. Typically, they are both down for the count around 7:30. Calvin has been sleeping swaddled in the Miracle Blanket for the past several weeks, but he has started breaking free, so this might just be the last picture of him all mummied-up. By the time I went in to nurse him before I went to bed, he already had an arm free. 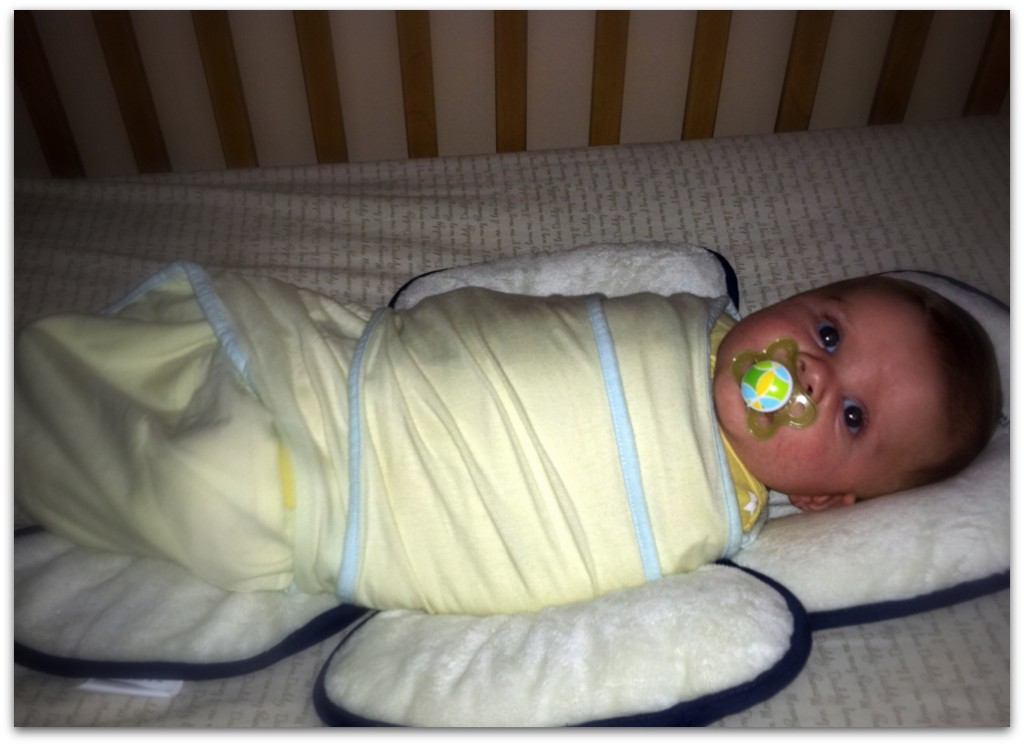 Oscar loves it when we both put him to bed, but story time has officially been relegated to Dada. He does THE best voices and I can’t even try to compare. Right now, we are on a Mater kick (from Cars) and that means the whole routine is done AS Mater. It’s pretty much awesome. 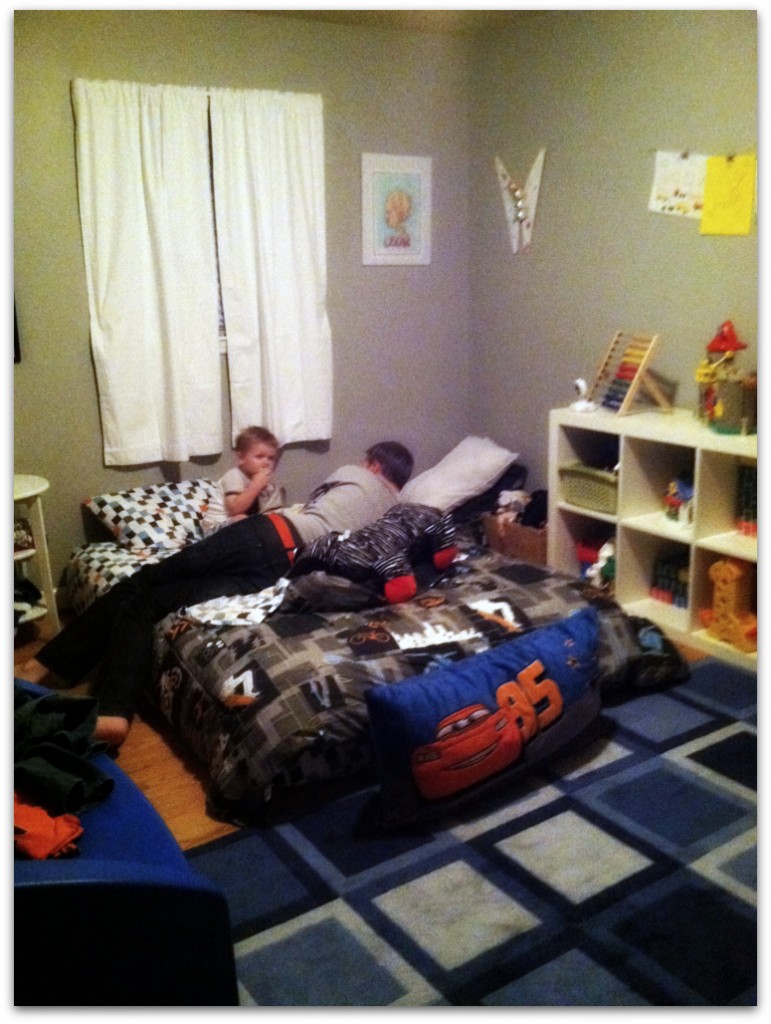 And now it’s time to sit down with a glass of wine and read and maybe blog, but on this day I am just too tired to be productive online. I enjoyed the quiet and chatted a bit and then Calvin woke up for one more meal, so I went in and nursed him. By the time I went to bed I think it was about midnight. 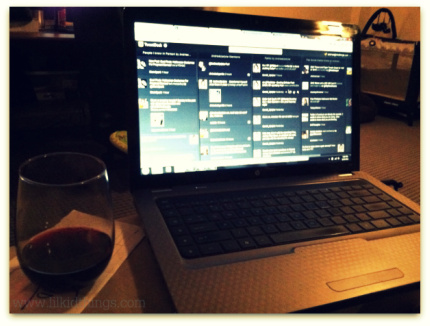 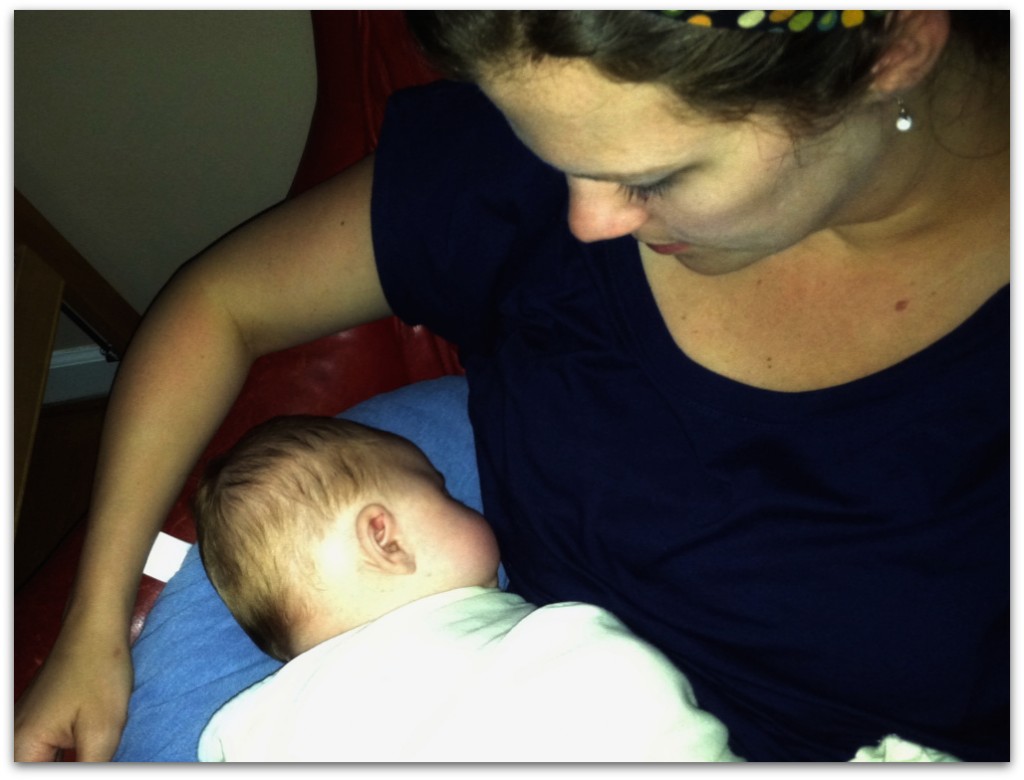 AND there you have it! My first day in the life! WHEW! What an awesome family I have. Thanks Melissa for prompting me to take the time to record the little things!

5 Ways to Show Love Every Day

Everything I Love About Wood Watches and a...

Cat Litter Scoop DIY and Introduction to the...

How to Move Beyond As-Is Living

It’s OK to Be Honest

Oh the mosquitoes!! We go out, too and everyday I get bit. How much longer before they die. I’d like to enjoy the backyard with my little one before winter gets here.
Love the “nugget” comment. Cute!
Popping over from Adventuroo to peak in on your day.

Oh the chicken nugget comment really has me laughing!

Awesome wrap-up, girl! I really love the running around before bath… THOSE are the types of things we often forget to capture (though you have a video so double-yay)!

Love the photo collages, the buys snuggling and that swaddled picture is to die for. Love. It!