Buffalo Chicken Mac & Cheese
Why the New Perdue Farms Delivery Service is...
Strawberry Pretzel Salad Dessert
Faster way to Fat Loss REVIEW with Q&A
Everything I Love About Wood Watches and a...
Real Talk: Sometimes I Dream of New Kitchen...
A Big Hero 6 review for parents
A trip to the NC Aquarium
Little People Zoo Talkers {Review}
A boy and his Dad….
Home Life & Home Why yes, I did enjoy running that 5k

Why yes, I did enjoy running that 5k

I am no fan of running. This has been well documented. I have tried to conquer it. I bought the shoes and the little pants. I even downloaded the Couch to 5k app. But I have never really enjoyed it. I do think it’s a great (not to mention free) way to exercise and build my endurance and I have come to grips with the fact that not everything has to be “fun”. I am even ok with the fact that I probably look like Phoebe jogging through Central Park….

But then I ran a 5k this weekend and had a blast.

I don’t know how it happened, but it was the greatest thing. I woke up to a spectacular spring day with clear skies and cool breezes, headed downtown with my playlist in hand and walked over to the Run For Our Heroes start/finish line. Just as I got there, they started reading off the names of local Police Officers who were killed in the line of duty and something sort of clicked. Here we were, remembering these local heroes and those who serve every day all over the world. It seemed like the least I could do was participate with a little running. 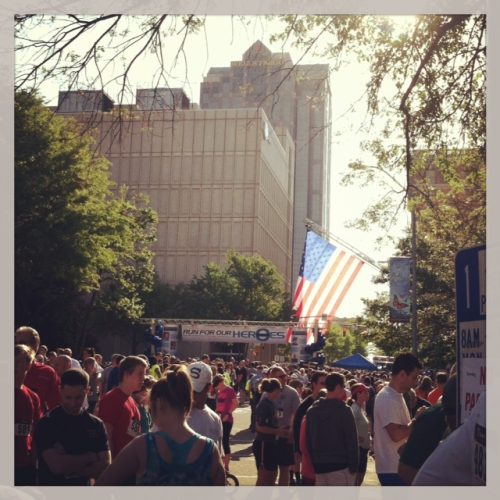 The mood was relaxed if even a little sober. They had an archway set up for photo ops supporting Boston and possibly the biggest American flag I have ever seen hung over the starting line.

When the gun went off I was exhilerated. I couldn’t wait to get going and away from the crowd into my own pace. I planned to walk and run about equal amounts, but I found that I was running longer and walking less simply because it felt good.

This is so not me. And it was awesome. 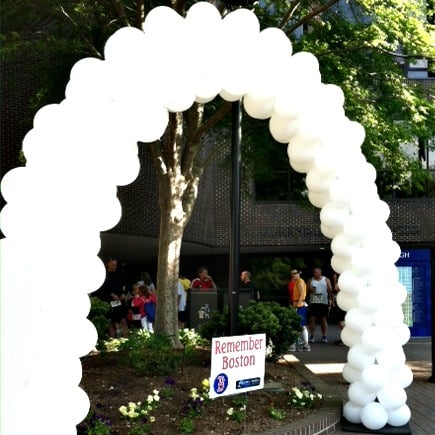 I even had a surprise fan cheering me from the sidelines! Somewhere about halfway through, I heard go Andrea! I looked around to see my dear friend Kim who lives just a few blocks from the race route waving at me. Talk about encouraging! Thanks Kim :).

Even though I was running alone I loved watching everyone around me have a great time. The Police Academy was running in formation and singing cadence, which was awesome to hear!

By the time I rounded the last corner I really couldn’t believe I had just enjoyed my run so much. It was such a foreign feeling to me and I’m not gonna lie, it rocked! My official time was 35:51 which puts me at 11:52/mile. That happens to be my best recorded time so far. 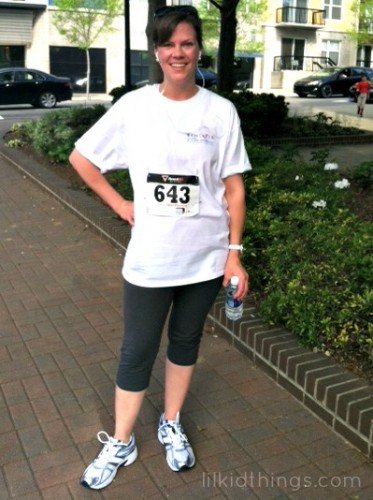 In just 10 days I will be attending the Disney Social Media Moms Celebration and running a 2-mile fun run with Biggest Loser winner Ali Vincent and Run Disney. I was happy to participate before, but now I am seriously looking forward to it!

Could this be the turning point I have been waiting for?

I Bought an Inflatable Family Pool for Summer...

How to deal with stress (yes it can...

Make your own family binder with free printables!

That’s so interesting that the race helped you enjoy running. I’ve never participated in one–because I don’t like running–but now I wonder if I would have the same experience! Thanks for sharing (and motivating). Love the Friends reference 😉

I have done a couple 5ks in the past few years and they didn’t do it for me then. I think it was a mix of the weather, my fitness level being better and really supporting the cause that gave me that boost this time!

woohoo for running. I did 3 miles today at the gym but running outside is always harder for me… you know cause there are hills and stuff.

Do it! Do it! I am hoping to do more this year and I have some fun plans for next year too 🙂

That’s awesome. Seriously. I’m totally waiting for my turning point because I love doing 5ks but I almost always end up walking a LOT of them. Which for me is totally okay, BUT I’d love a turning point like this one. GO YOU!

One thing that really helped me is that it’s OK to walk! Olympian and Disney trainer Jeff Galloway recommends a walk run program for almost all races. That was SO freeing to hear! check out his training stuff on rundisney.com. You might be surprised.

Also? OMG – LOVE PHOEBE. We say that our kiddo runs like Phoebe, absolutely!

[…] and I need your support. Whatever the reason, since I took on my running challenge in April by running a 5k and started training for my first Half Marathon EVER, I have seen some remarkable progress. I have […]

[…] realized back in the Spring that for me, running is all about the races. I love having a goal to work toward and the energy of a big race event is hard to beat. I’ve […]

[…] realized back in the Spring that for me, running is all about the races. I love having a goal to work toward and the energy of a big race event is hard to beat. I’ve […]