Less review and more just go watch this movie and get ready to smile. Descendants 3 was worth the wait. We laughed, we cried, we danced in our seats.

This post contains affiliate links, which means I may earn money on purchases made.

We’ve been looking forward to Descendants 3 for a very long time in this house. So when the day finally arrived and it was time to watch, I was super excited.

Of course, with the sudden and tragic passing of Cameron Boyce (Carlos), it was a bittersweet moment when we finally sat down to watch. As soon as he came on the screen I began to tear up. I guess that’s what happens when you watch someone grow up, even if only on TV.

The Descendants movies, like many other Disney-related things for me, bring a welcome sense of nostalgia to the forefront.

For a Disney fan, these movies are not hard to love. They have heroes and villains, catchy pop music and super fun costumes. Are they realistic? NOPE. And I wouldn’t have it any other way. 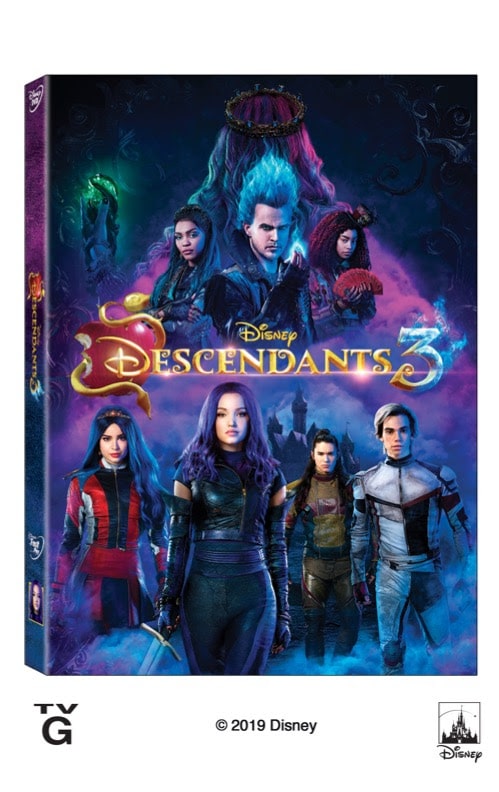 We first learned about the Descendants franchise on a Walt Disney World vacation where we saw advertisements for Descendants 2 on every bus. My boys were curious so as soon as we got home, we found the first movie and played it on repeat until the second one came out that summer.

As you may know, the wait for the third movie was quite long so I couldn’t wait to see it. And this review is less review and more, just watch the movie and smile.

Not everything can be groundbreaking and I am okay with that. Sometimes we just need a little entertainment.

Descendants 3 has really fun music, a surprising villain (who totally stole the show) and an obscene amount of evil laughter. It’s exactly the movie it should be.

This highly anticipated Disney Channel Original Movie continues the contemporary saga of good versus evil as the teenage daughters and sons of Disney’s most infamous villains – – Mal, Evie, Carlos and Jay (also known as the villain kids or VKs) — return to the Isle of the Lost to recruit a new batch of villainous offspring to join them at Auradon Prep. When a barrier breach jeopardizes the safety of Auradon during their departure off the Isle, Mal resolves to permanently close the barrier, fearing that nemeses Uma and Hades will wreak vengeance on the kingdom. Despite her decision, an unfathomable dark force threatens the people of Auradon, and it’s up to Mal and the VKs to save everyone in their most epic battle yet.

It’s hard to review a movie like Descendants 3 because it’s hard to be serious. That said, it’s just a really fun popcorn movie and I am on board.

Let me just say that it was so fun seeing the gang back together. My family agrees that we loved Uma in this movie so much more than the last one and Hades is 100% my favorite adult villain in the series. Full stop.

I do wish we had seen more from Dr. Facilier’s daughter as the trailers looked like she would have a bigger role. And learning who the real villain in this movie is may surprise you.

We loved the twist and I’m ready for a rewatch.

Have you seen Descendants 3 yet? Grab it on DVD and be sure to check out the bonus features, which include a Blooper Reel, Deleted Scenes, and the Under The Sea: A Descendants Short Story.

At the end of the movie debut, Disney shared an amazing tribute to Cameron.

And then we cried again.

You mean everything to us ? pic.twitter.com/yIuesmkemn