Disney’s Live-Action Aladdin takes us back to Agrabah in a whole new way. See what the latest Disney remake got right and where it missed the mark in my movie review and parent’s guide.

When I write movie reviews, I’ve always approached them first as a fan, second as a parent, and third as a critic. I don’t set out to pick movies apart. I love going to theaters and I’m good at suspending reality.

But when it comes to remakes, I have a particularly hard time with this. Especially when I loved the original as much as I loved the animated version of Aladdin.

This review is going to be a little different because I’m starting it before I actually see the movie. Don’t worry, we’ll get to my thoughts, but I had some reservations about this one and I wanted to write them down before seeing the film to see how it all shakes out.

If you have never seen the original Aladdin, I think you will love the new version. That said, if you are a little worried like me, let’s talk about it. 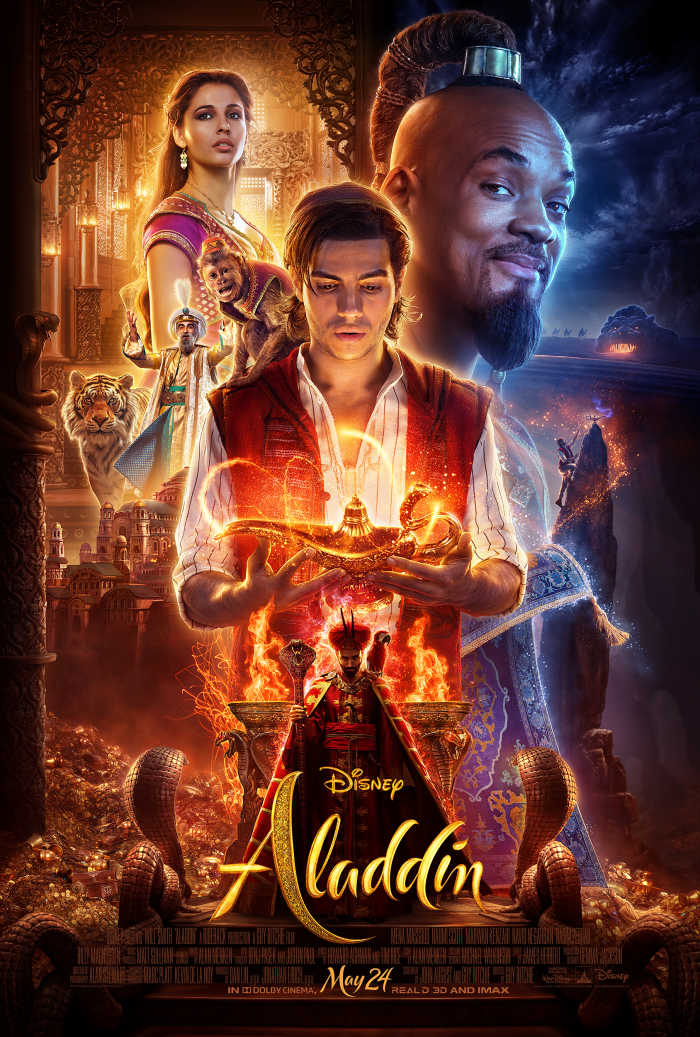 We were provided with free admission to facilitate this review. All opinions are my own. My posts contain affiliate links, which means I may earn money on purchases made.

My Live-Action Aladdin Concerns Before the Movie

I’ve seen the trailers and I didn’t hate them. But I also didn’t love them and that’s where I am torn. Can a live-action Aladdin possibly live up to the original? No. It can’t. So my only hope is that they don’t try a scene for scene recreation of the film because I don’t think it will work.

Will I like the characters? This is hard to say. I am a Will Smith fan and I was so excited to hear he would be playing Genie. But then the photos came out and then the trailers came out and I have to say, this is when I started to get concerned.

I really want to be pleasantly surprised so you should know I am going to try to love Will as Genie. I really do want him to rock it!

I’ll also admit that I’m not loving the casting choice for Aladdin himself and I really need to see the humor and easygoing Aladdin we all know and love. My hope is that this is just a case of not enough time in the trailer.

How will the music compare? I had the Aladdin soundtrack memorized after the original came out. It is one of those times in my life where I clearly remember feeling every single word and sound. So the music is a big deal.

I do love that they are reusing so much (all?) of it in the new film. That said, it will be different and already, it is throwing me off. They really need to nail the music. Please nail the music!

Will it look fake? Since the original movie was a cartoon, I see how this seems silly. But if we’re going live-action here, it had better feel real, right?

Of course, I am also excited for the magical fun. Specifically, I’m ALL IN for Alan Tudyk as the voice of Iago. It may be the thing I am most looking forward to. 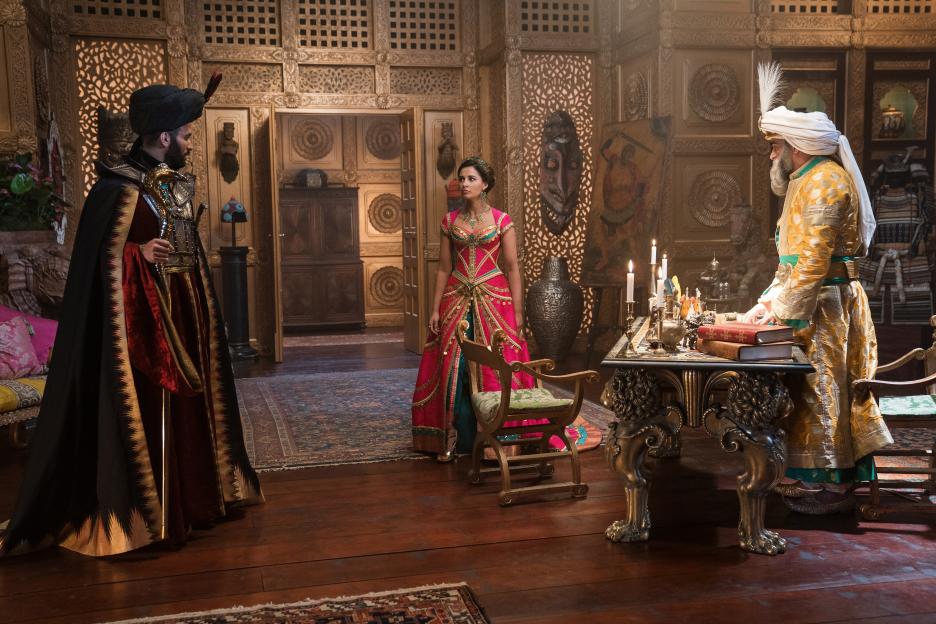 So far, I’m also loving the set design, colors and gorgeous costumes. And honestly, Disney nails this every time so if nothing else, I will have something dazzling to look at for 2 hours and 8 minutes.

For so many of us Aladdin and especially Robin Williams as Genie is almost sacred, so it’s hard to imagine the story told by anyone else in any other way. But I’m excited to see what they do with it and I can’t wait to share how my questions are answered.

With a few exceptions, Aladdin is very close to the original and at times a frame by frame reproduction of the animated film. If you know the story of Disney’s Aladdin, you know what to expect. If not, have a look at the trailer below.

Official: A thrilling and vibrant live-action adaptation of Disney’s animated classic, “Aladdin” is the exciting tale of the charming street rat Aladdin, the courageous and self-determined Princess Jasmine and the Genie who may be the key to their future.

Did the live-action Aladdin answer my questions? Yep. And overall, I am satisfied with the remake. I took both my sons to see it (thanks Amy for adopting one of my boys!) and we settled in for the show. All of us have seen the original and we all enjoyed the remake for the most part.

As the movie opened, I was immediately nervous. For the most part it WAS a scene for scene recreation and for someone who has seen the original many times, I was comparing every single detail which was a distraction. I started to panic.

For me, it took the first 20 minutes or so to really adjust to the movie. I don’t think that will be an issue for new viewers.

Thankfully, while there are many very similar scenes in the movie, there are enough changes throughout that my initial comparison game faded away and I was able to enjoy the movie.

Ultimately, we all left the theater smiling and had a lot of fun. But you know I have things to say. Let’s go back over those questions.

The good news is, there really wasn’t any single character/actor that I hated. But I definitely liked some more than others. I warmed up to Mena Massoud’s Aladdin but felt the character in general still fell a little flat. To be fair though, he was never my favorite anyway.

I was so excited to see Will Smith as Genie but when I saw the trailers, I worried. What I loved about his version of Genie is that it’s clear he never had any intention of filling Robin Williams’ shoes.

He made this Genie his own and I actually really fell in love with the character once I got to know his style. You could tell Will had a blast in this role. 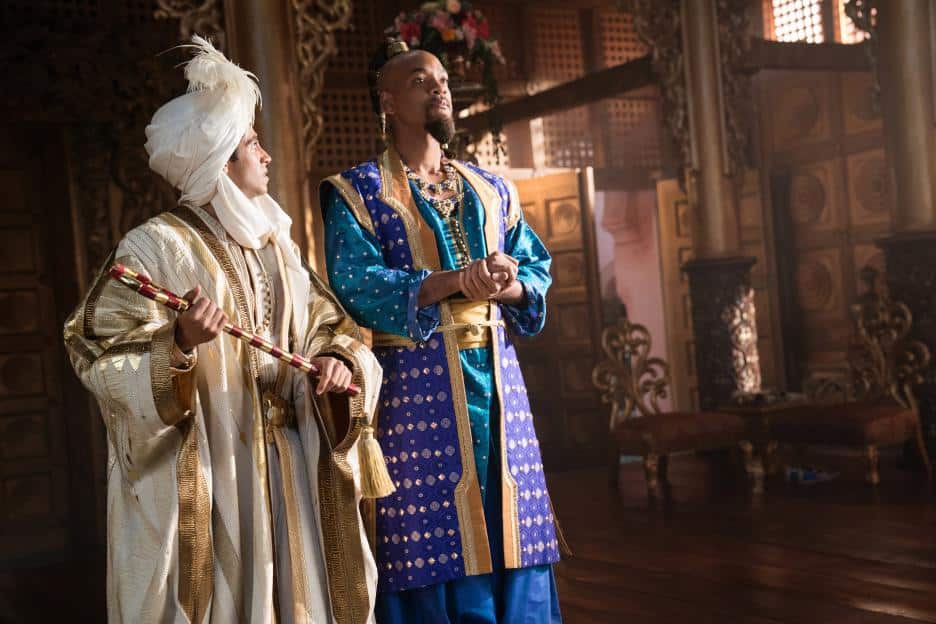 Jasmine, Jafar, and the Sultan surprised me. I really enjoyed all of their performances and felt they were a little more grown up than their 2-dimensional counterparts. And y’all, Naomi Scott can SING.

That said, when my boys asked who my favorite characters were, I immediately rattled off Magic Carpet, Abu, Raja, Iago and the menagerie during Prince Ali’s entrance.

It was only then that I realized my favorite parts were still animated/CGI. I guess old habits die hard.

How does the Music in Live-Action Aladdin Compare to the Original?

As I wrote above, I was really worried about the music. The one little clip they used in the trailer felt slow-paced and off. I love this soundtrack and I had doubts.

I am happy and totally relieved to say that I loved the music! In fact, Prince Ali ended up being one of my favorite scenes and songs in the entire movie. Will Smith had me laughing and I nearly jumped up and started dancing right then and there.

It was a surprise that Jasmine has a new song in this movie. I see why they added it but thought it was unnecessary. I didn’t really care for the song and it felt a bit pandering to the Disney Princess genre in general.

But the woman can sing! A Whole New World was spectacular and I might even say better than the original. And I loved the Bollywood flair they added to a few of the big crowd songs. I’m not sure how it fits in authentically speaking, but I enjoyed it nonetheless.

Will it Look Fake?

Disney’s Live-Action Aladdin, while heavily relying on CGI, felt as real as a fantasy movie like this can. The sets, colors, and costuming were fantastic and I felt like I was looking right into everyday Agrabah life, with one exception; it seemed very clean and nearly no one had an accent. 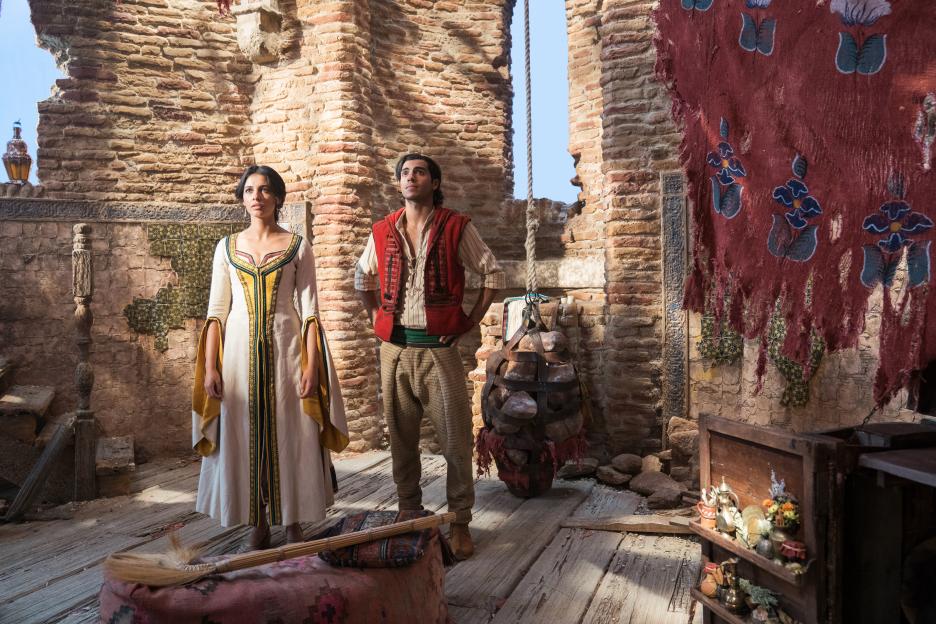 I know this is also true in the original but for some reason, looking at real people in what was supposedly the real Middle East, it seemed out of place that everyone was speaking perfect American English, with the exception of one foreign prince (Prince Anders) and I still have no idea what his accent was supposed to be.

If you remember the original Aladdin, you probably know some of the controversy around the stereotyping and design choices, so I guess I was hoping for a little more course correction here.

Parents can rest easy taking the kiddos to see this one. Jafar is of course the big bad and he has his moments, but there wasn’t anything gruesome or long-lasting in terms of scary content.

I don’t think I heard any language (Tania can correct me if I’m wrong) and for the most part, the message was a positive and entertaining lesson in finding out what you really want, with an extra message of empowerment that I think parents of girls especially will appreciate.

There are a couple kisses (just like the original) and some very mildly suggestive dancing, but nothing that raised any red flags for me.

At the end of the day, Disney’s Live-Action Aladdin will be a hit for new viewers and an acceptable remake for die-hard fans. It’s not perfect, but that’s getting harder to achieve these days.

Take your kids to see Aladdin and have a fun day at the movies. I’m willing to bet you’ll be singing as you leave the theater.

Aladdin is rated PG for some action/peril. The runtime is 128 minutes. Follow on Social at @DisneyAladdin.

Want even more Aladdin? Enjoy these free printable activities from Disney! Click on the image below open the PDF and print. 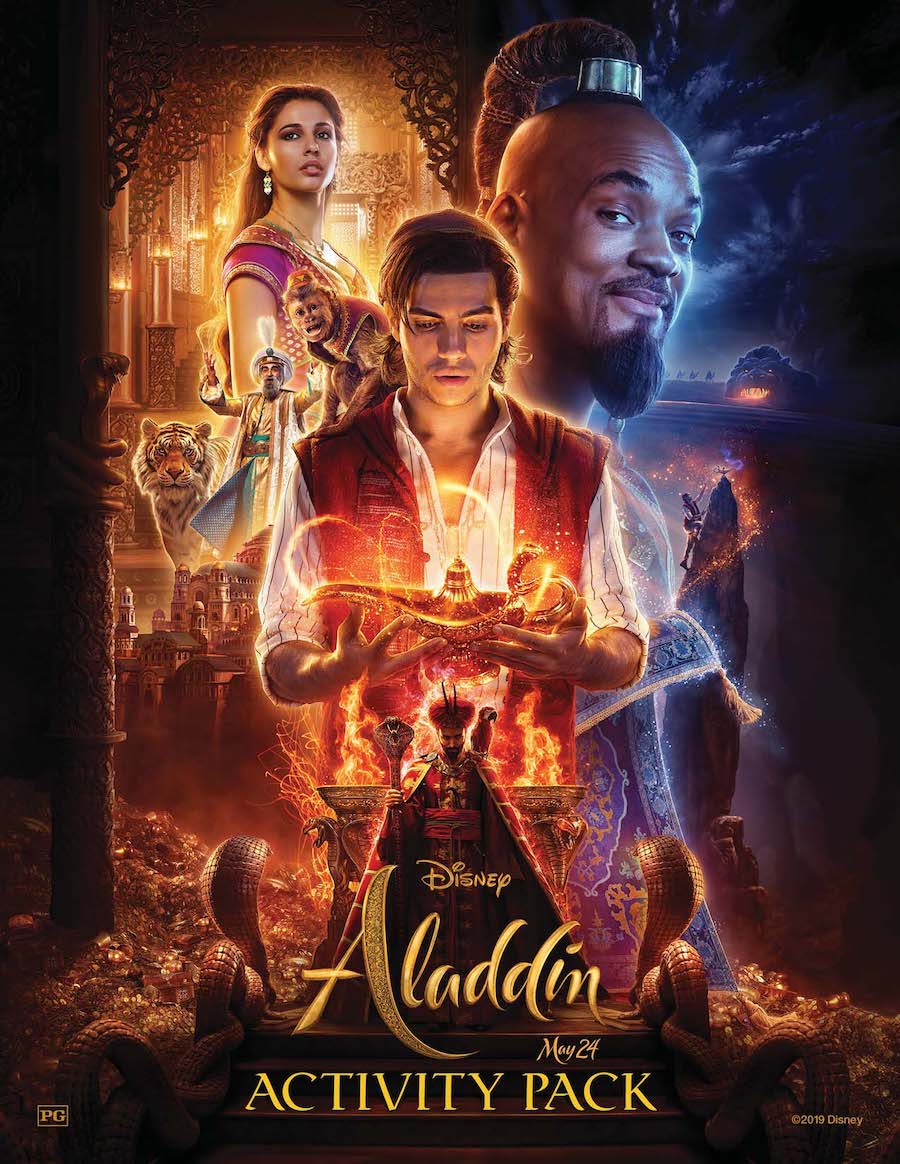 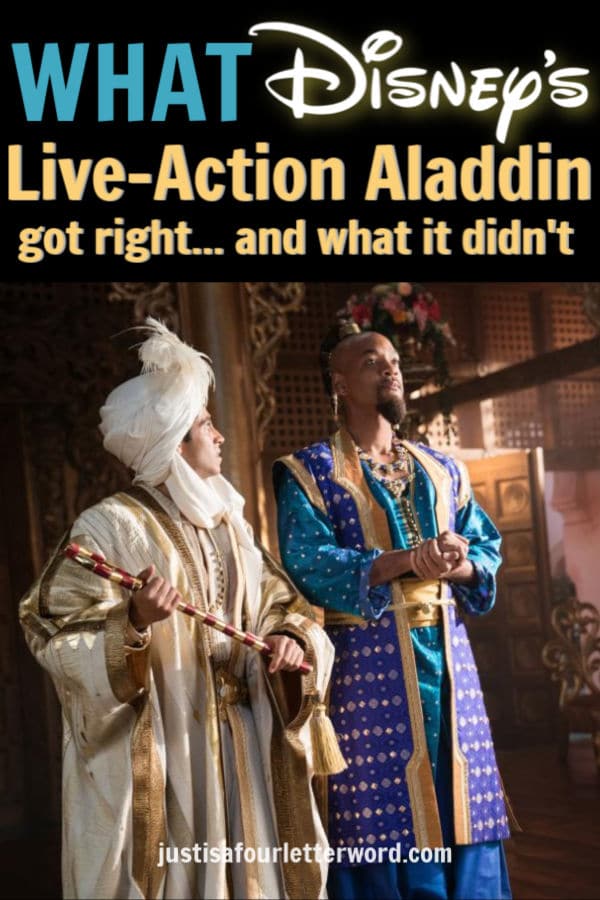