Last night I had the pleasure of being entertained by Cirque du Soleil: Quidam. It was the first Cirque show I have ever been to and I was highly anticipating a great night out with friends.We were not disappointed! Since the show didn’t start until 7:30pm, we decided to leave the boys at home with my mom (thanks mom!). That said, after seeing the show I would definitely consider bringing them next time. It was a lot more kid-friendly than I expected and I think it would be totally fun from around age 6 and up.

Quidam was full of exciting feats of strength, flexibility and moments of OMG I can’t believe the human body is capable of doing that! I thoroughly enjoyed myself. 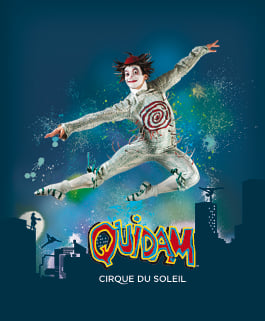 I don’t want to spoil the show by giving away too many details. But I was pleasantly surprised by a few themes that I hadn’t expected.

I highly enjoyed the show and I would definitely recommend it! If you are in the Raleigh, NC area you can catch Cirque du Soleil: Quidam from now until Sunday!

Have you seen Quidam? What did you think?

Disclosure: I was provided with tickets to see Quidam for the purpose of facilitating this review. All opinions are my own. Thanks for reading!

Why These 7 Original Disney Plus Shows are...

The World According to Jeff Goldblum is a...

Lady and the Tramp is a Charming Return...

Marvel’s Hero Project Reminds Us That The Kids...

Forky asks a Question on Disney+

Why The Ride of a Lifetime Should Be...

I went last night, too (as you know) and I really enjoyed it. We brought our 6yo and she loved it. Their bodies are so amazingly powerful. It was kind of crazy to witness. 🙂

OMG I know! The performers were 1000% muscle. It was so cool. I am glad to hear your daughter loved it too! I can’t wait to take the boys when they are a little older.

Bummed we missed seeing you guys last night. Joe and I kept commenting on things we knew would upset the boys if they were there… like when they released all balloons, they would have freaked out.

[…] Quidam was in town, we had a fantastic time and were in complete awe of the Cirque performers. I have no […]