Toy Story 4 is finally here and I’m sharing what I really thought of this movie in my Toy Story 4 review. Did it live up to all the hype? For me? No. Here’s why Toy Story 4 is not what you think it is.

Toy Story 4 is officially in theaters today and by now you’ve no doubt seen the rave reviews, critical acclaim, and the nearly unheard of 100% score on Rotten Tomatoes (which has fallen to 98% by the time of this post). It’s the 4th movie with giant shoes to fill, but does it? Not exactly.

I had the chance to screen the movie earlier this week and boy do I have thoughts. As a longtime fan of the Toy Story movie franchise and now the addition of Toy Story Land at Walt Disney World, I’ve been looking forward to this movie ever since I heard it was happening.

Not once did I think we didn’t need it or that it would be too much. I was ready and willing to love it. My expectations were high and I think that was my first mistake. 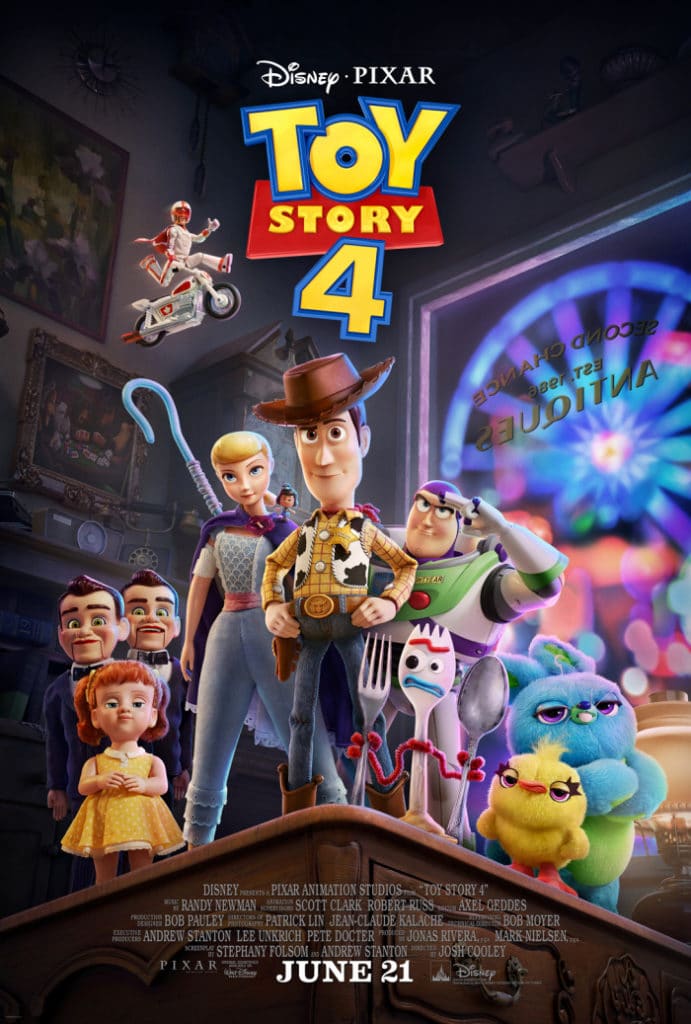 This review, much like my live-action Aladdin thoughts, will be a little bit hard to write because as much as I wanted to, I did not love Toy Story 4. And I think, like Aladdin, viewers will fall into two camps; casual viewers and long-time fans.

I think casual viewers will enjoy the movie as the fun adventure that it is. I think the long time fans with high expectations based on the first 3 movies may leave disappointed. Here’s why Toy Story 4 is not what you think it is.

Is Toy Story 4 Okay for Parents?

Many posts I’ve seen will answer the question, is Toy Story 4 good for kids? But I’m going to focus on the parents here because I think you may care even more than the kids if you’re as invested as I was.

The Toy Story franchise has done a special thing that few other movies have been able to accomplish. They managed to create a kids movie that not only appealed to parents, but connected and moved us as much as any meaningful non-animated movie can.

Buzz, Woody, and the gang, with Andy at the lead took us both back in time to our own childhoods and into the future as we imagine our own children growing into adulthood. That is really hard to do.

The original three movies, while hilarious, didn’t just use silly jokes to get parents and kids to laugh together. They skillfully wove an imaginary story to include parents as participants in the journey, rather than simply spectators. 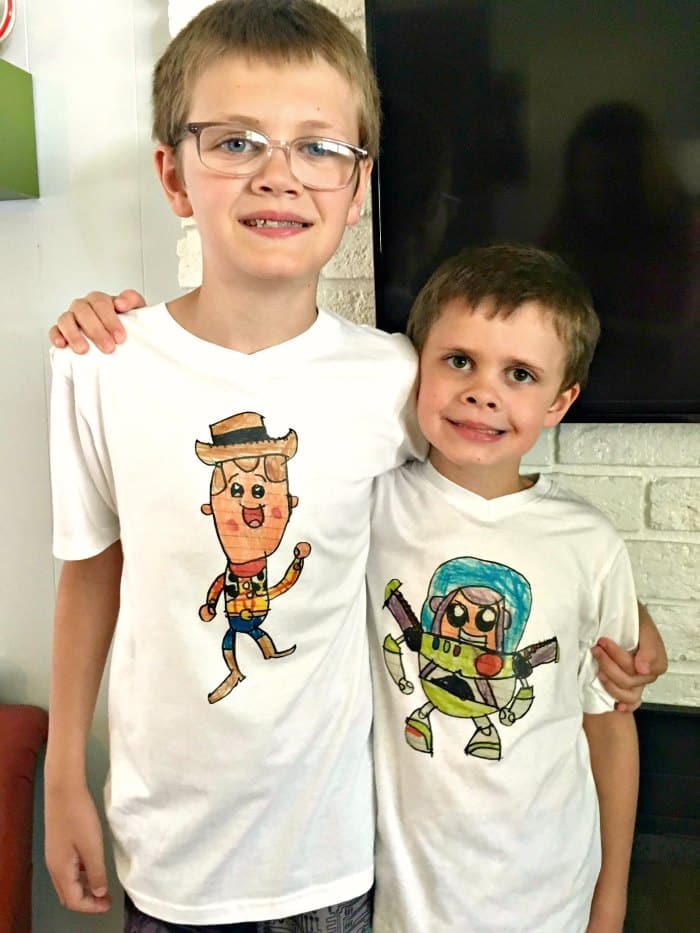 See how to make these Matching Disney Family Shirts here

Having boys of my own who played just like Andy and Bonnie made the story so real to me, it was easy to forget it wasn’t. This is why we sob at the end of Toy Story 3 and it’s why I personally will always think of the first 3 movies as part of my parenting experience.

Toy Story 4 in contrast, is more like one of the other Toy Story adventure shorts. I would compare it to Toy Story That Time Forgot or Toy Story of Terror before I would connect it to the first three movies. 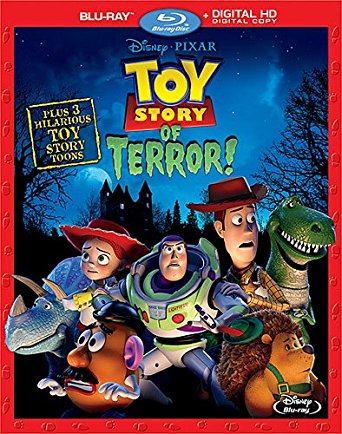 As a parent, Toy Story 4 didn’t move me at all. As a casual viewer, I think it will be enjoyable and as always the animation is like nothing else.

If you have high expectations that got even higher after seeing so many positive reviews, you may want to climb down a few rungs on your ladder of hope. This movie is fun, but it’s no Toy Story 3.

Why Toy Story 4 Should Have Been a Standalone Movie

The more I think of the issues I have with Toy Story 4, the more I realize that they are less about the movie and more about how it has been presented.

The first 3 movies were the perfect story arc. Toy Story 4 feels disjointed and out of place with THAT story, even if the adventure is fun. It could have been called The Adventures of Woody and Bo or Bonnie’s Vacation: A Toy Story Adventure and I’m not sure I would have had such an issue.

Maybe it’s nit-picky to say, but that number 4 really made me think it would tie together with the original three. If that was the goal, I don’t think it worked.

Toy Story 4 introduces so many new characters that we barely interact with any of our original favorites. We know from the previews that Bo Peep is back and while I do like what they did with her character, this really is the Bo and Woody show.

There is very little action from the others and that was a bummer. I was particularly surprised to see Buzz Lightyear with such a small role, especially after all the press.

Are the New Toy Story 4 Characters Any Good?

I did enjoy the new characters and got a few laughs from Ducky and Bunny, Giggle McDimples, Duke Caboom, and Forky. But I can’t say any of them were overly hilarious or moving for me.

I didn’t connect with them in the way I fell in love with Jessie in Toy Story 2 or even Lotso in Toy Story 3 and I think maybe fewer new characters could have helped with that. There was a lot to keep up with.

Gabby Gabby and Benson the dummy were particularly menacing and I liked Gabby Gabby more than I expected to. Benson was probably my favorite new character both for his creepy antics and the way Pixar chose to animate him.

I definitely perked up every time he (and his henchmen) were on screen and he made me laugh the hardest. What can I say? I love a good dummy. That said, kids may find him too creepy so your mileage may vary.

What to Expect from Toy Story 4

I will be the first to admit that my expectations were high. If you are like me, this review is meant to help you lower the bar before setting foot in the theater because at the end of the day, Toy Story 4 is a cute movie with a fun adventure, amazing animation, a few laughs and some sweet moments.

It’s a little bit love story and a little bit of a goodbye. You will laugh and you may cry (I didn’t) and you will have fun with your family.

Parents, you’re in the clear. This movie will not rip your heart out and serve it to you in a cloud-covered gift bag like the end of Toy Story 3. It’s a fun summer movie to enjoy with the family, with a few mildly intense scenes despite the G rating.

That said, if you are looking for a moving continuation of the journey with our favorite toys akin to the first three, I don’t think you will find it in Toy Story 4. Set your expectations accordingly and let me know what you think when you see it!

Toy Story 4 has a runtime of 100 minutes and is rated G. Have you seen it? Let me know if you agree or disagree with my Toy Story 4 review in the comments below. 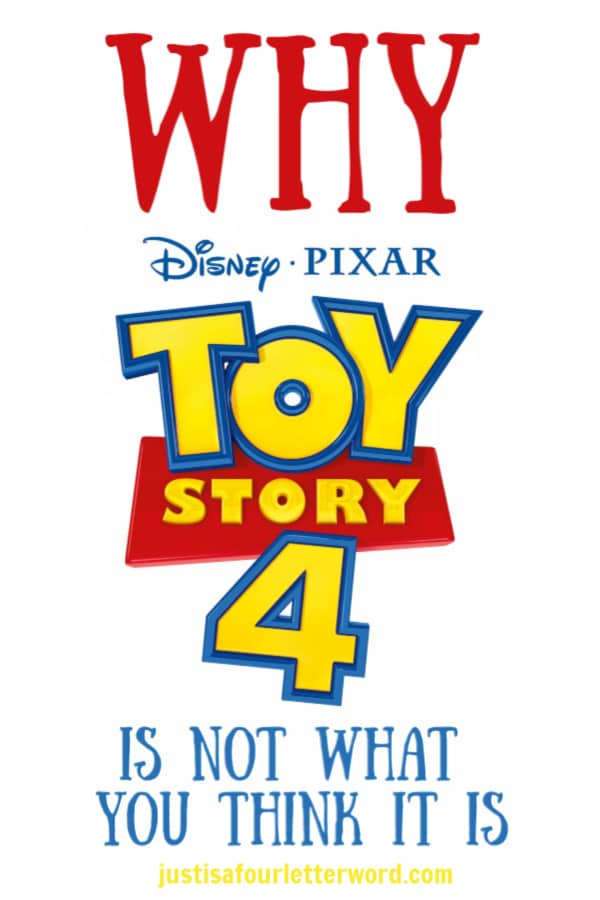