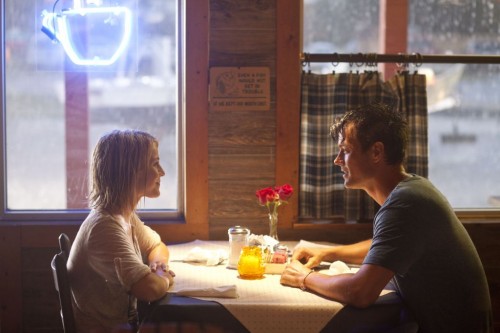 True confession time. I have never seen the movie The Notebook. I know I know. I heard all the things and it’s on my list. I just somehow never really got around to it. In fact, I really don’t know that much about Nicholas Sparks. So when I asked my husband to join me at the early screening of the movie Safe Haven for a low-budget early Valentine‘s date,  I really didn’t even know how to describe it.

Now that we have seen the movie, we are offering our spoiler-free his and hers recap! (Make sure to comment if you think Jerry should post here more often, cuz I sure do!)

An affirming and suspenseful story about a young woman’s struggle to love again, Safe Haven is based on the novel from Nicholas Sparks, the best-selling author behind the hit films The Notebook and Dear John. When a mysterious young woman (Julianne Hough) arrives in a small North Carolina town, her reluctance to join the tight knit community raises questions about her past. Slowly, she begins putting down roots, and gains the courage to start a relationship with Alex (Josh Duhamel), a widowed store owner with two young children. But dark secrets intrude on her new life with such terror that she is forced to rediscover the meaning of sacrifice and rely on the power of love in this deeply moving romantic thriller. (Rating: PG-13 | Run Time: 115 Minutes)

Ok so initially, I was excited to see a movie that was filmed here in North Carolina. Even more so when I learned that the little girl who plays Lexi is actually from my beloved City of Raleigh! Somehow, I just connected with the film because it felt like home. Also, Jerry and I both immediately recognized one of the houses they filmed as being one we drive past often so that was really fun! But movie trivia aside, I decided to do his and hers reviews since the movie release is today (Valentine’s Day) and chances are, a lot of couples will be standing in line tonight!

His and Hers movie reviews of Safe Haven

I was really expecting this to be a cheesy love story. Since I don’t have a history with Nicholas Sparks books or movies, I really didn’t know what I was in for. I was surprised at the suspenseful parts of the movie and really touched at the depth of the relationships between the (widowed) father and his children. I shed a few tears imagining my own husband and children going on with their lives if something ever happened to me. Definitely bring the tissues!

There were some sweet moments that made me giggle too and the scenery was beautiful (even if I am biased). The star of the movie to me though was definitely Raleigh native, Mimi Kirkland who plays Lexi in the movie. She was bright and sweet and actually acted like a kid. Safe Haven is a lovely date movie with a few twists and turns to keep things exciting!

Who is Nicholas Sparks? Who are Julianne Hough and Cobie Smulders? No idea. Who is Josh Duhamel? Duh: he was Leo on All My Children and starred in “When in Rome” and “Las Vegas”. I love his work. Judging from the poster, it looked like your run of the mill chick flick, but it was our low budget Valentine’s date and I was excited to go whether I thought I would enjoy it or not.

The scenery was awesome and they captured the Coastal Carolina beauty perfectly. “Single Dad with kids” always gets me, as a dad of 2 myself. I’m easily manipulated and often get teared up during commercials, episodes of Grey’s Anatomy, etc. I was preparing for this movie to make me cry…at the very, very end just before the lights come on so everyone in the theater would see. Thankfully, the big tear jerker scene came with enough time for me to pull myself together and pretend my allergies were acting up. Whew!

The plot was not all that original (woman with a past, man ready to love again, etc), and I was OK with that. But then they went and tried to tack on a big surprise ending that, to me, didn’t work at all. I did not read the book, which may have handled this aspect much better, but to me the ending didn’t fit with the rest of the movie. I give it a 6/10.

Have you seen Safe Haven yet? Let’s talk about it!

Interesting! Love getting both perspectives. :-) I haven't seen it or read the book, although I did see The Notebook many moons ago. I will probably see it when it comes out on Netflix. :-)

I haven't seen it yet, but I love Julieanne. And Josh? GAH. Gorg.

I've not seen it yet, but it sounds really cool!

I kind of felt the same way as you and wasn't sure if I'd want to see this, but it sounds pretty good!

First of all I LOVE YOUR honesty-- SO refreshing and second of all- YOU MUST see THE NOTEBOOK- it. will.change.you!