Despite not having much time in theaters, My Spy is heading to Amazon Prime in some markets. Is it ok for kids? Check our My Spy parents guide to the movies.

I’ve been wanting to tell y’all about My Spy for months since my family screened it in January.

This movie was so much better than any of us anticipated and I was truly disappointed it wasn’t able to be in theaters for long.

Dave Bautista showed his comedic chops we love him for and Chloe Coleman stole the show with her wit and timing.

That said, there are a few things I want parents to know when it comes to choosing My Spy for your next family movie night. 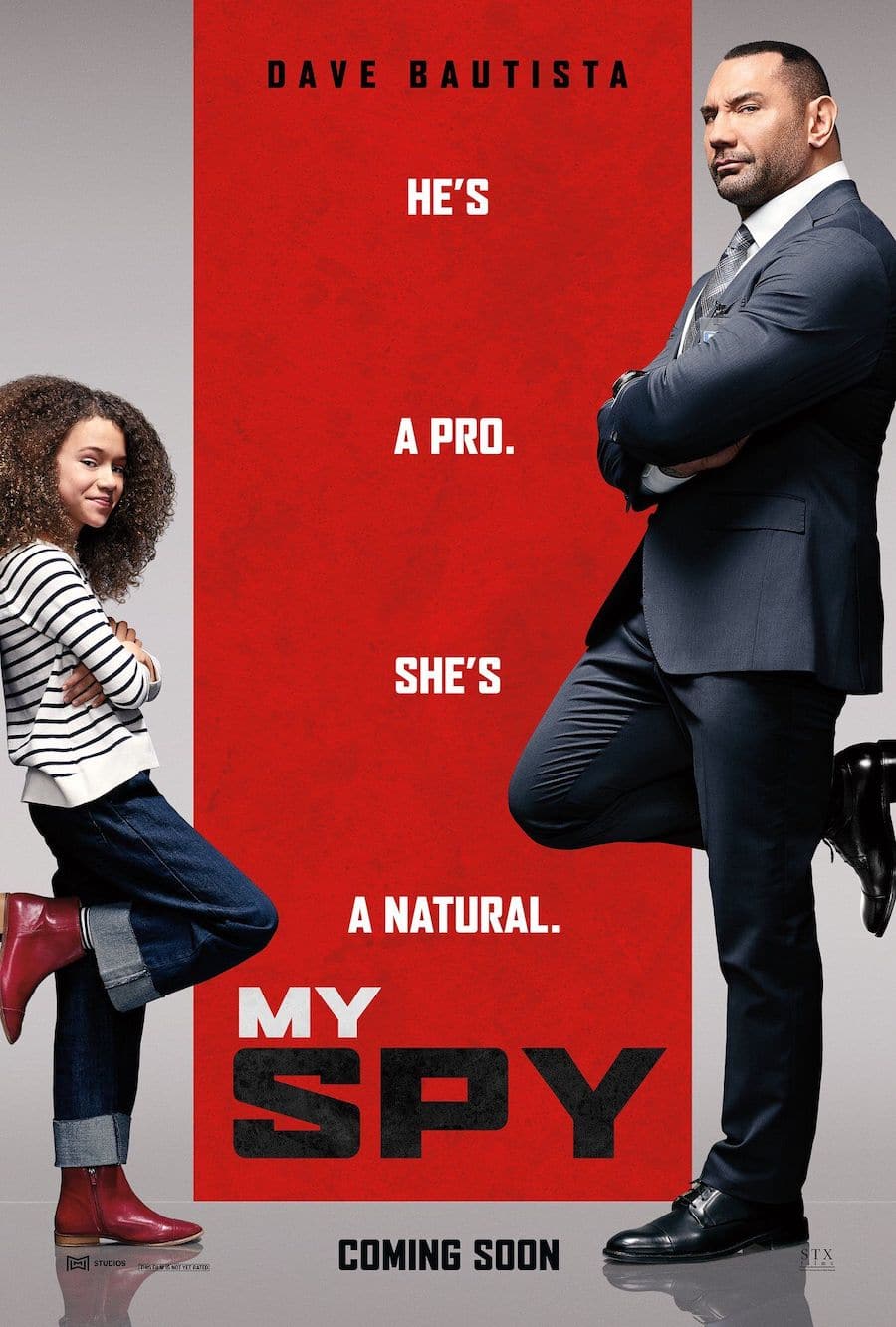 Here’s a little bit more about the movie. Part action, part family fun, this one is an unexpected winner.

MY SPY follows JJ a hardened CIA operative (Dave Bautista) who has been demoted and finds himself at the mercy of a precocious 9-year-old girl, named Sophie (Chloe Coleman) where he has been sent undercover begrudgingly to surveil her family.  When Sophie discovers hidden cameras in her apartment she uses her tech savviness to locate where the surveillance operation is set.  In exchange for not blowing JJ’s cover Sophie convinces him to spend time with her and teach her to be a spy. Despite his reluctance JJ finds he is no match for Sophie’s disarming charm and wit.

The film was directed by Peter Segal (“Get Smart”) from a script penned by Jon and Erich Hoeber (“Red”).

Watch the My Spy Trailer

The story is not exactly new. We have JJ the tough and kidless government operative and Sophie, the lonely outcast at school. They form an unlikely bond and she learns how to become a spy.

It’s a fun and funny movie that had us laughing nearly the whole hour and 42 minutes.

That said, My Spy is rated PG-13 for action/violence and language. And there is a lot of language! I was surprised at two things here. One, there was so much more swearing than I anticipated. But two, it totally worked so somehow I didn’t mind. Weird, I know.

If swearing is a deal breaker for you, this is one to skip unless they release a TV version. It’s a lot and I may not have taken my boys to the screening if I really knew. Otherwise, it was very entertaining and I find my self relaxing on the language these days when there is so much more to worry about.

In terms of action, there are plenty of explosions and gunfighting, but nothing that was visually disturbing. A few scenes may be intense for younger viewers.

My 8 and 11 year old sons loved it and so did us parents.

Is My Spy Streaming on Amazon Prime?

Just this weekend, reports started rolling in that My Spy is streaming on Amazon Prime. However, I looked and it’s not being offered yet in my market so I’m not sure when it will be available for all of us.

Is this true for you or are you able to stream it now? Let me know!

See all our movie and tv reviews here.