If you’re preparing a holiday meal and the oven is full of turkey and homemade stuffing, using the Instant pot to heat ham is a great way to save on cooking time.

Getting that delicious flavor and taste at the perfect warm temperature is totally possible and frees up the oven for other uses.

When it comes to ham, I am pretty reliant on a tasty cooked ham from the grocery store. I love how they are fully cooked so all I need to do is warm it up.

It’s simple but so delicious. It’s hard to beat that flavor whether you are making ham sandwiches or serving Easter dinner.

Make sure to check out my Instant Pot Taco Soup for another super simple Instant Pot recipe. (and one that you’re going to love!)

The Instant Pot is one of my favorite kitchen appliances – and for good reason! Making Instant Pot appetizers and meals mean that we’re going to have hearty and delicious flavors no matter our busy schedule.

Your family isn’t going to believe how juicy cooked ham can truly be. Say “goodbye” to the days of dried-out ham, and get ready to savor every bite.

No matter if you’re cooking for a crowd or serving the main course at a big family dinner at home, the entire ham will be cooked and ready in no time at all.

All you need are a few ingredients:

How To Make Instant Pot Ham

Remove from packaging materials and place ham in the liner of the electric pressure cooker with the cut side down.

For best results, press the brown sugar into the sides of the ham and pour the pineapple and juice around the ham.

Cover and set the valve to sealing. Program the electric pressure cooker using “manual” or “pressure cook” for 8 minutes.

When complete, quickly release the pressure before removing the lid.

Remove and place on a baking tray or cutting board. Cut ham or slice as needed prior to serving.

If a sweet glaze is desired, switch the electric pressure cooker to “saute” mode after removing the ham and pineapple chunks.

Bring the juices to a boil and simmer, stirring as needed, until the liquid is reduced by half. Cover top of ham with glaze.

If you don’t have or want to use an Instant Pot, the slow cooker is another good option. It’s a longer process to heat the ham (about 2-3 hours or more on low heat) to cook but still tasty.

Just make sure the internal temperature measured with a meat thermometer registers 145 degrees Fahrenheit so you know that the ham is hot all the way through.

You can also heat the entire ham in a 325-degree oven by placing it in a shallow roasting pan or oven-safe baking dish for about 10 minutes per pound or until ham reaches the correct temperature.

The oven method is great for larger hams when you want to feed a crowd. Depending on the size of your ham, you may need to move the rack to the lowest position.

Bottom line, the best way to warm up a ham is up to you!

What else can I do with a Ham?

Even though there are simple steps to warming up the ham, there are a few options to keep in mind on ways that you can change up the flavor.

If you’re not a fan of pineapple, you can swap it for water or chicken broth. Some people like the combination of sweet and salty but it doesn’t have to be for everyone.

You can also opt to leave out the brown sugar if you’re not wanting a sweet ham!

What To Serve With Precooked Ham

Side dishes are some of my favorites. Not only can you enjoy fresh ham with sides, but don’t forget about leftover ham, and ham slices, too.

One of my favorite things to do during the holiday season is wander by a table of food and graze on the ham. It’s so good. Am I the only one who does that?

Some of my favorite side dish recipes for ham are:

Or scrap the sides and just load up on bread rolls, too! Adding a pound of ham between the slices of homemade bread is the best!

How to store Leftover Ham

Make sure that you place leftovers in an airtight container. This keeps it nice and fresh and ready to eat for the next 2-3 days.

Before adding it to a container for storage, let it cool to room temperature first.

Can I freeze extra ham?

Freezing a whole ham or sliced ham is a breeze! You can either freeze it whole or cut off individual slices and store it in the freezer that way.

Cutting it into smaller sections and freezing it makes it easier to use for multiple recipes. Be sure to wrap ham in plastic wrap and then use a freezer bag or heavy aluminum foil to provide a second layer.

When it comes to a family dinner or making a huge meal for a holiday dinner or gathering, cooking a ham in the Instant Pot is the perfect way to feed a crowd. Grab the printable recipe so that you can have it handy and ready to go. 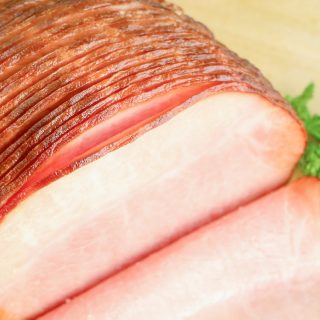 Andrea Updyke
Cooking ham in the Instant Pot is a great recipe for a fast and delicious weeknight meal!
4.41 from 5 votes
Prevent your screen from going dark
Print Recipe

Be sure to check out my tips and tricks in the post. Scroll up to read!

Ham can be eaten right away or refrigerated in an airtight container for 2-3 days. Nutrition details will vary based on the size of ham.

Nutrition information is estimated. For the most accurate info, always doublecheck with your ingredients.

Tried this recipe?Please leave us a rating to let us know what you think!
Click here to cancel reply.