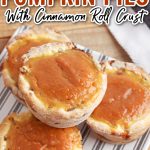 I have another cinnamon roll hack for you! Using a muffin tin, it’s so easy to make these adorable mini pumpkin pies with a cinnamon roll crust.

In fact, you only need 4 ingredients.

If you loved our apple pie bars, these mini pumpkin pies will be a great addition to your fall menu.

Sure, you may want to make a traditional pumpkin pie with a pie crust made from scratch at some point. But who says we only get pie once?

My affiliate links are below, which means I may earn money on purchases made.

These little pies are so easy you will want to make them again and again. And they are great to throw in a lunchbox too! Let’s hear it for pumpkin spice season!

To make, you will need:

I love how quickly this easy recipe comes together for a classic Thanksgiving dessert with a twist. Serve right away or keep them in an airtight container to enjoy whenever you want.

Begin by preheating the oven to 350°F and grease 8 cups in a regular muffin pan with nonstick cooking spray. Make sure the bottom and sides of the muffin cup is coated.

Then, open the cinnamon roll package and separate each roll.

Sprinkle some flour on a flat surface and use a rolling pin to roll each cinnamon roll until it’s flat. You can also use your fingers to flatten the rolls into small circles.

Carefully press each cinnamon roll pie crust into the prepared muffin pan to form a cup.

In a large bowl, whisk together the pumpkin filling, evaporated milk, and egg until smooth and well combined.

Allow to cool in the pan until safe to touch, then transfer the mini pies to a wire rack to cool completely before serving.

I love pumpkin pie just about any way you serve it whether it’s plain or topped.

Some ideas to top these mini pies include traditional whipped cream or homemade pumpkin ice cream.

Or if you want to bring out the cinnamon roll flavor, drizzle the icing from the package over the top and serve right away!

The best part about this simple recipe is there is something for everyone.

They are the cutest little mini pies and the perfect way to kick off a great holiday season. For more pumpkin goodness, be sure to try these pumpkin spice cookies next. 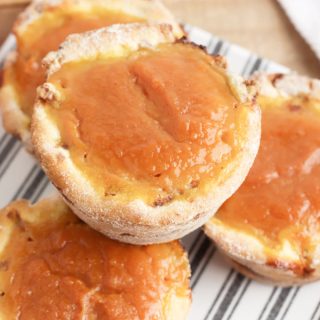 Be sure to check out my tips and tricks in the post. Scroll up to read!

Nutrition information is estimated. For the most accurate info, always doublecheck with your ingredients.

Tried this recipe?Please leave us a rating to let us know what you think!
Click here to cancel reply.