What can I say? Cats are awesome. And this cat litter scoop DIY project is pretty cool too! Level up your scooping game or get crafty on a backup scoop with this tutorial.

Something occurred to me recently; I don’t think I have ever properly introduced you to the newest members of our family! I figure the week is over, it’s Friday, and it’s time to have a little fun.

So what do you say, wanna meet my kitties?

*Updated from May 2016. This post was originally sponsored by Collective Bias, Inc. and its advertiser. All opinions are mine alone. 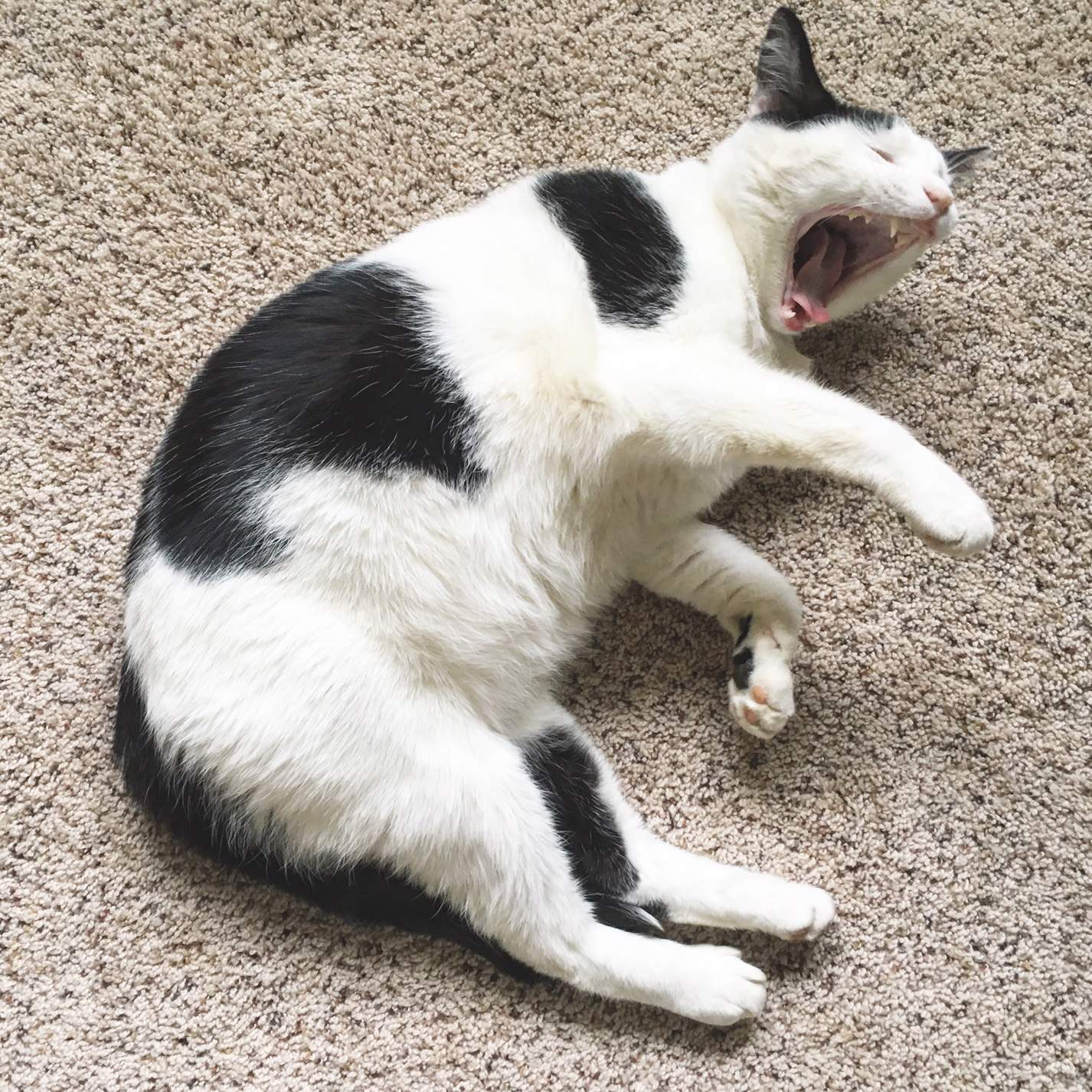 Hi. I’m Brick and I killed a man with a trident. Ok not really, but I love to kill small rodents.

In summer 2015, (4th of July weekend to be exact) Jerry and I decided we wanted to get a cat. We haven’t had pets (other than a fish) since we said goodbye to our dog (Krusty) years ago and we knew it was time.

Of course, as we began looking for a cat, we found two. They were brothers and there was no way we could split them up. Also, we’re suckers. Doesn’t it always happen that way? 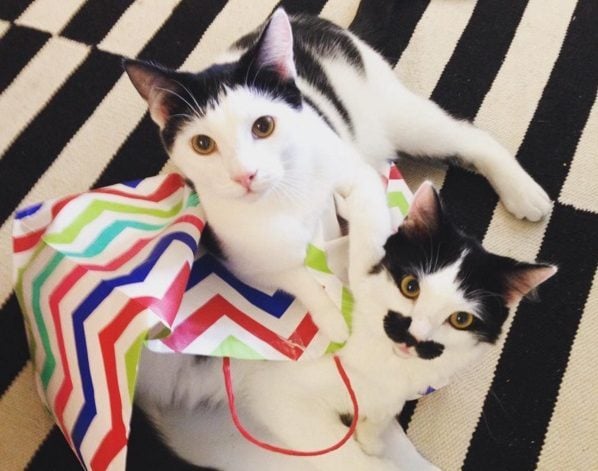 We fell in love with the little mustache and toupe features on these sweet brothers as soon as we saw them. They were just under a year old when we adopted them and were indoor/outdoor cats, so that meant they were already trained both inside and out. 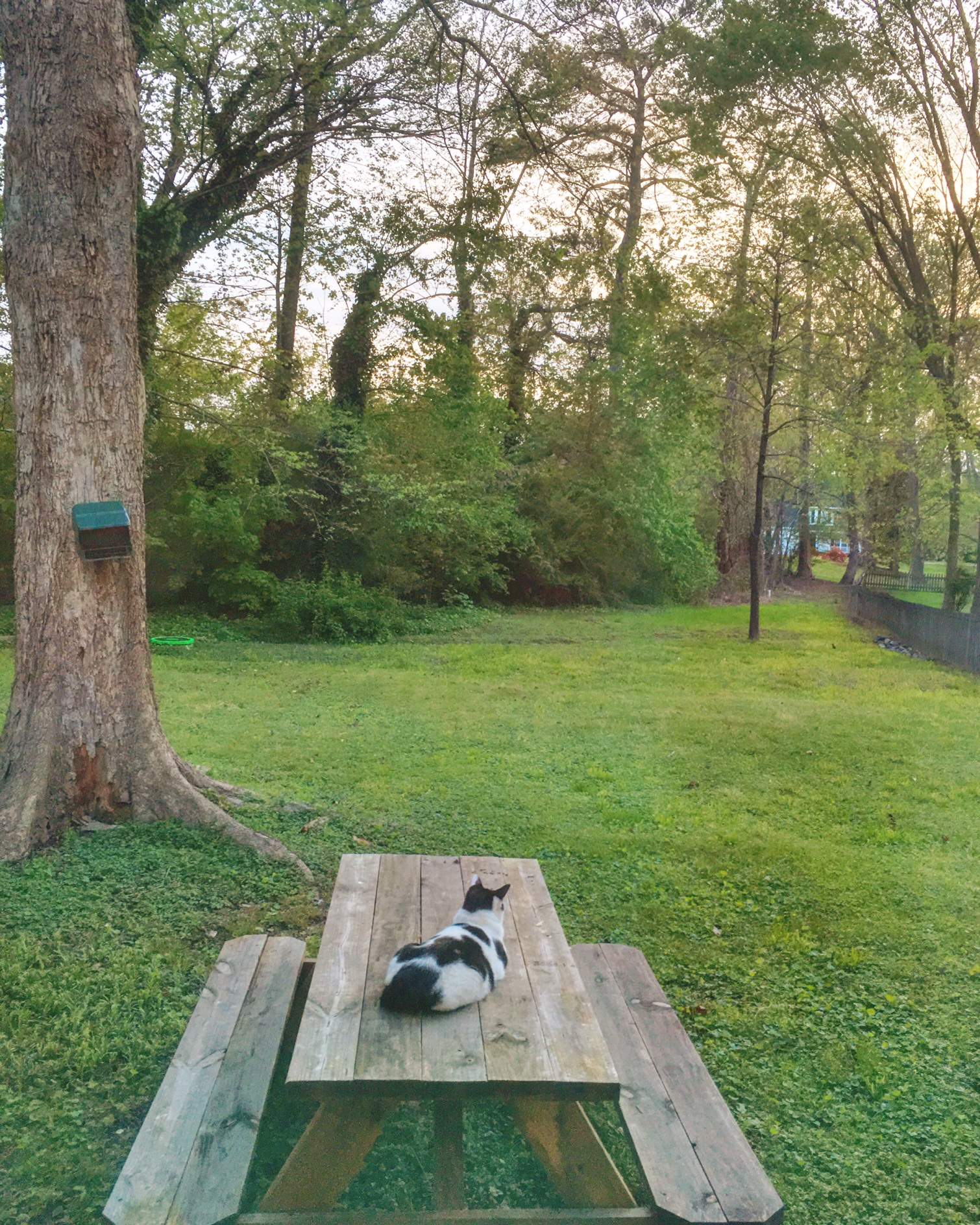 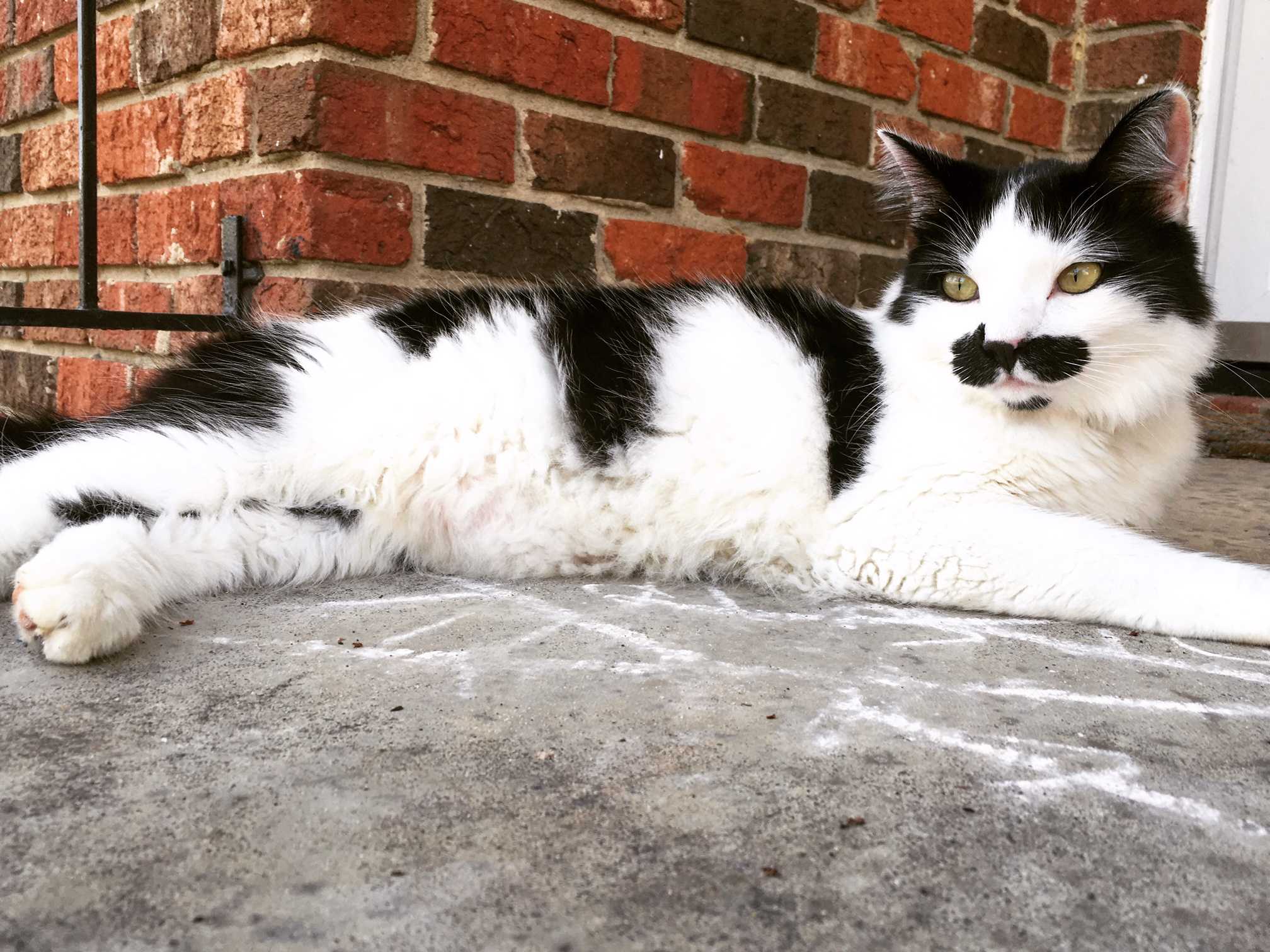 My name is Ron Purrgundy. I’m very sophisticated and I like sleeping on all your nice things.

This was good news for us because we were facing a vole/mole problem in our yard and we were hoping for some hunting kitties to take over the land. And boy have they!

Brick and Ron Purrgundy (named after one of the best movies of all time – oh Hai Will Ferrell!) are beloved by everyone in the family, including Jerry who has never been a cat person. But seriously, who can blame him? Just look at these two. 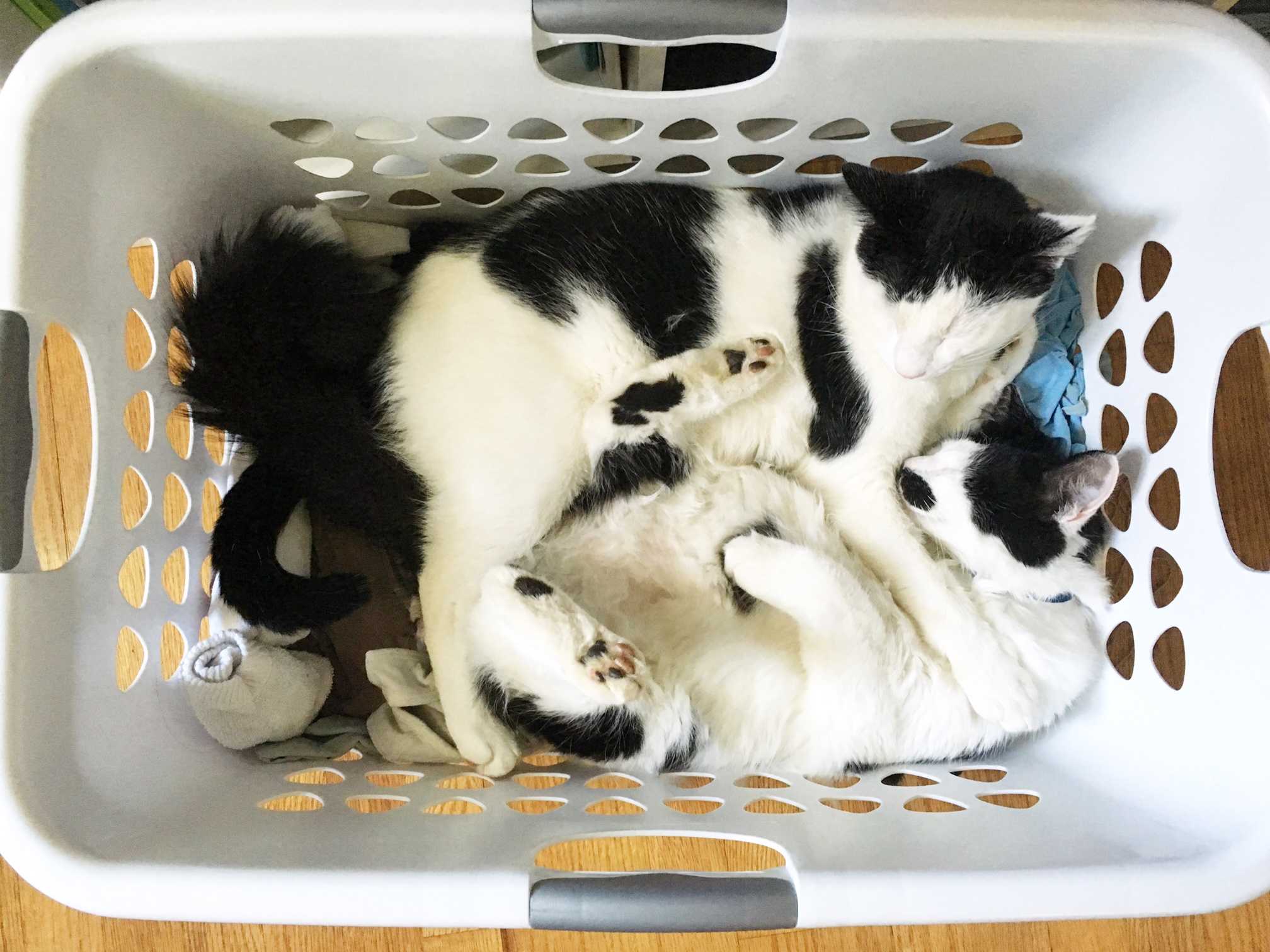 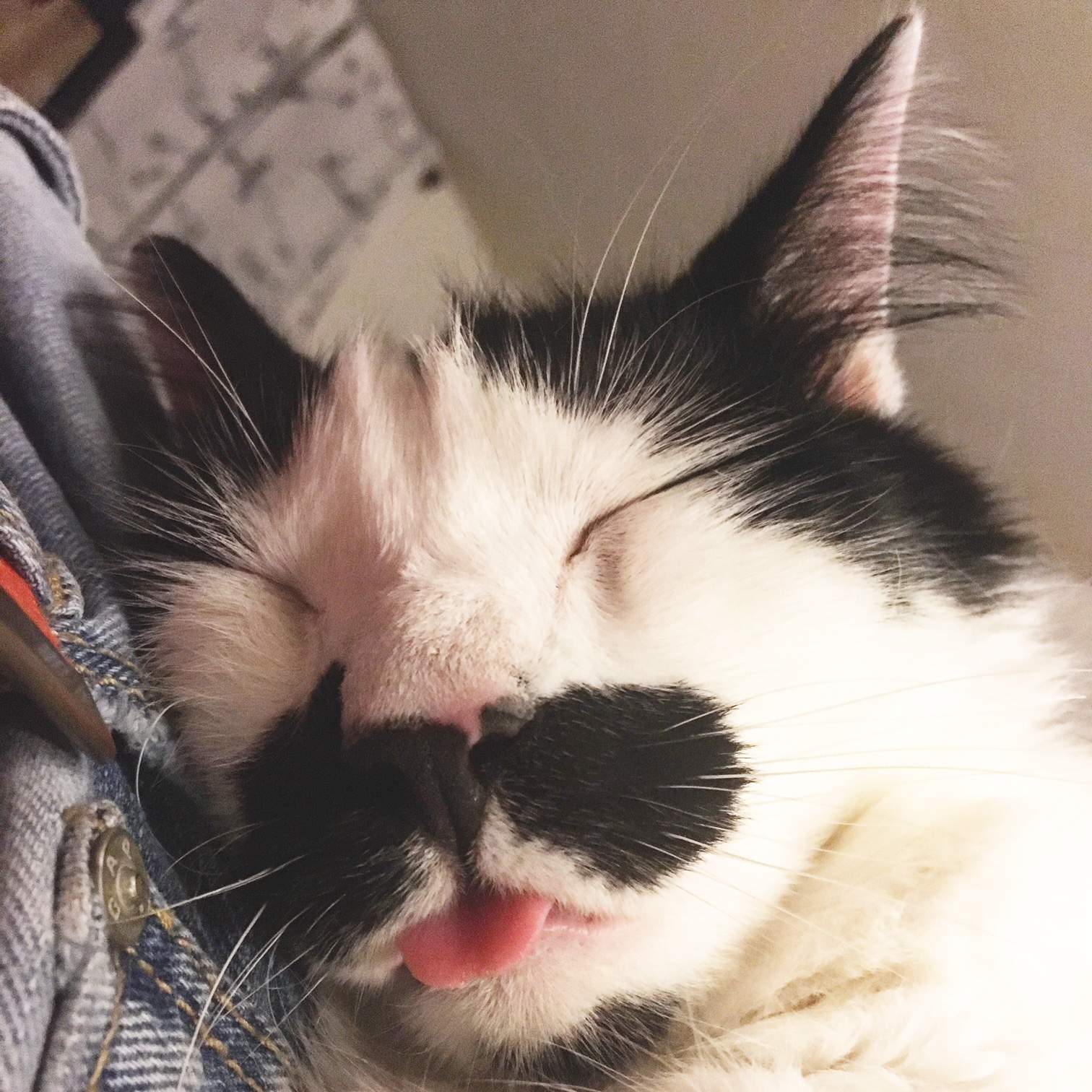 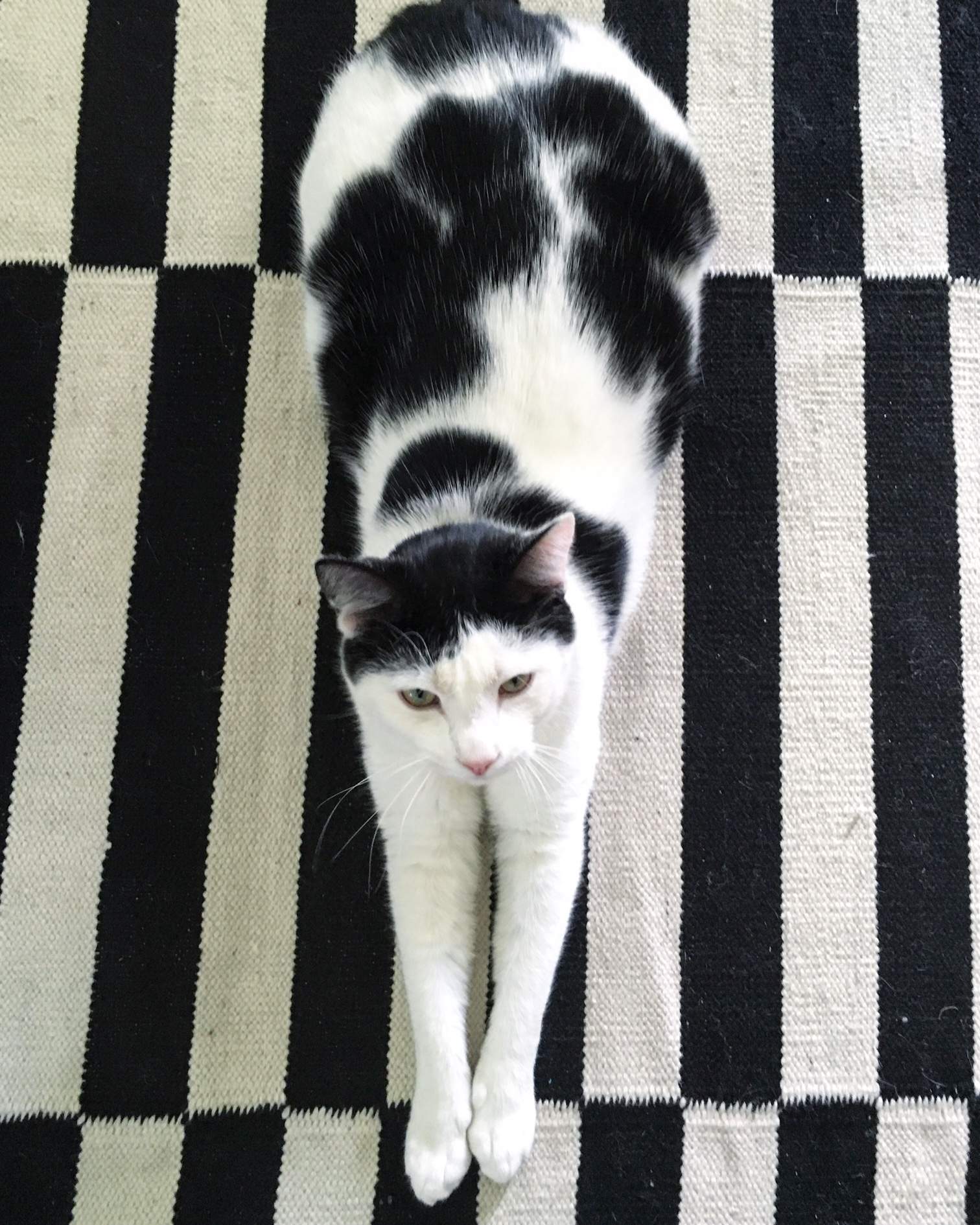 Oscar and Calvin love having pets and we’ve all learned a little something about responsibility and how we need to take care of each other every day.

Oscar feeds the kitties every morning and Calvin has taken on the very important tasks of NOT picking them up or sitting on them like horses. 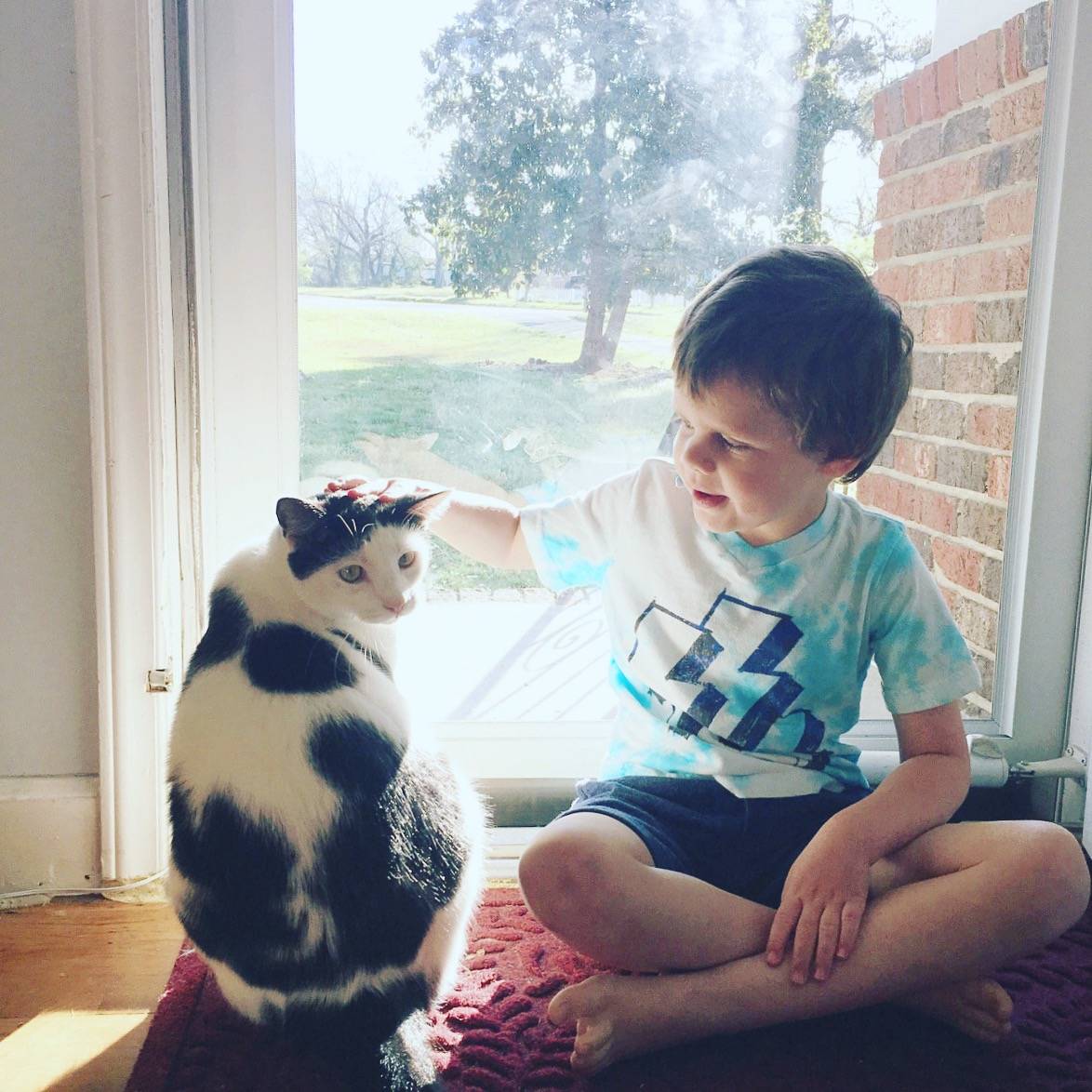 Having cats has really added another layer of fun to our lives. Adventure too! Like the time when Calvin started screaming at the top of his lungs because Brick sauntered into the house with a vole in his mouth.

Even though Brick and Ron come and go, we still keep them inside at night so a litter-box is essential. Scooping kitty litter is no one’s favorite job but as cat-owners, we do what we have to do.

We don’t have a huge home so it’s important that we don’t have odor issues when it comes to litter. I was excited to try out the new Fresh Step Total Control with the Power of Febreze recently and we really like it. It has Borate Technology for superior ammonia control, which inhibits the growth of odor-causing bacteria and a nice lemongrass citrus scent. You should also know that it’s only available at Sam’s Club, but lucky for me, I go there every month! 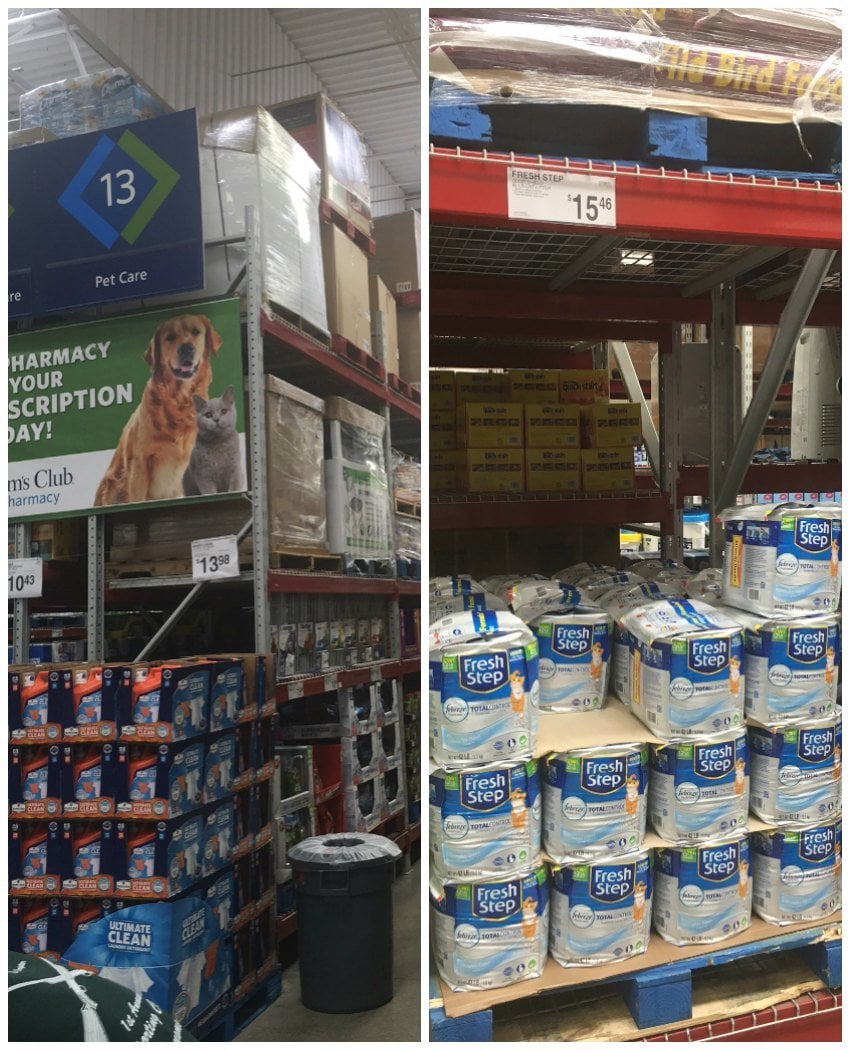 And if you find yourself in need of a makeshift scooper, you can make your own DIY milk jug cat litter scoop using an empty milk jug! All you need is a marker, some scissors, and a utility knife. 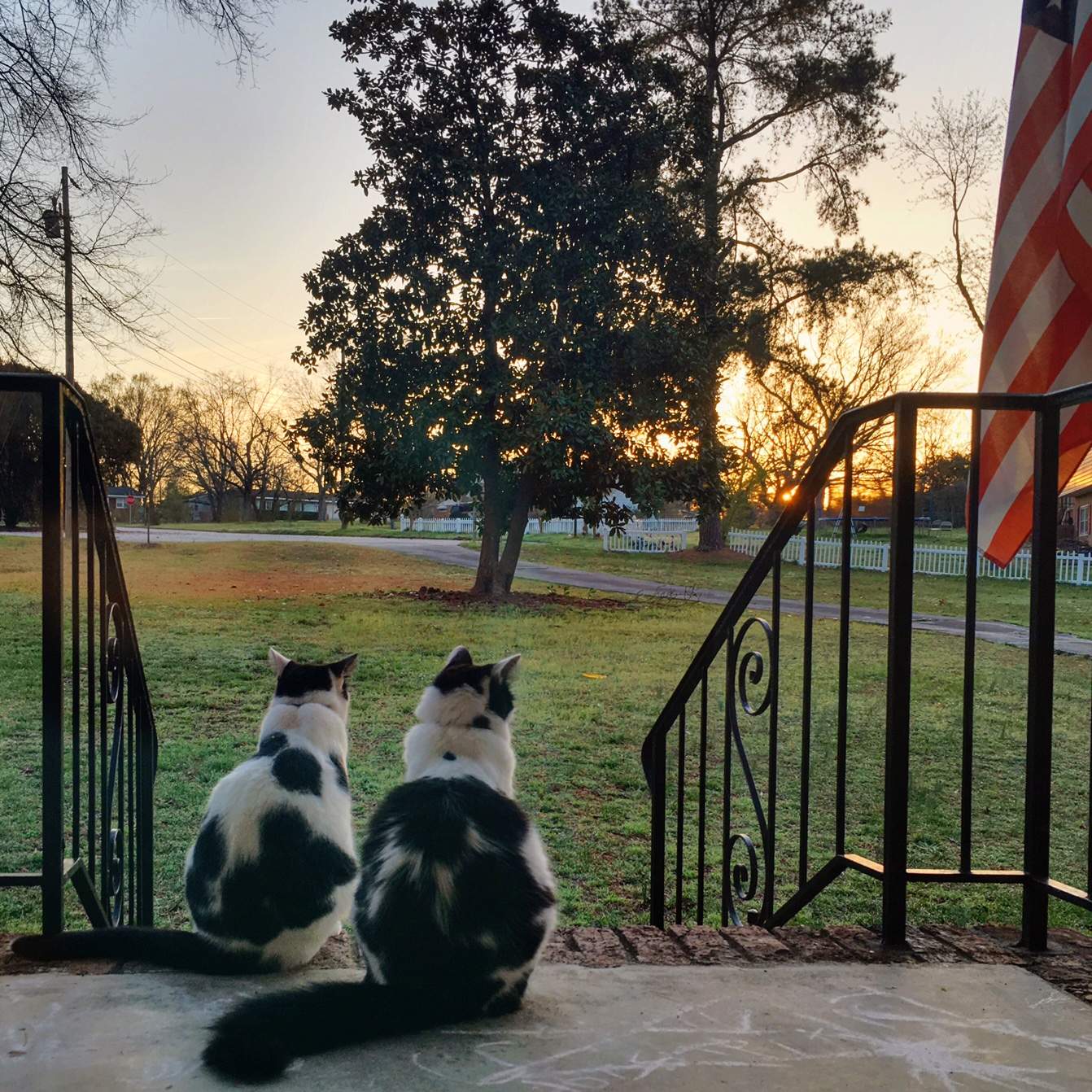 It’s true; Brick and Ron have conquered our hearts. Next stop, world domination. 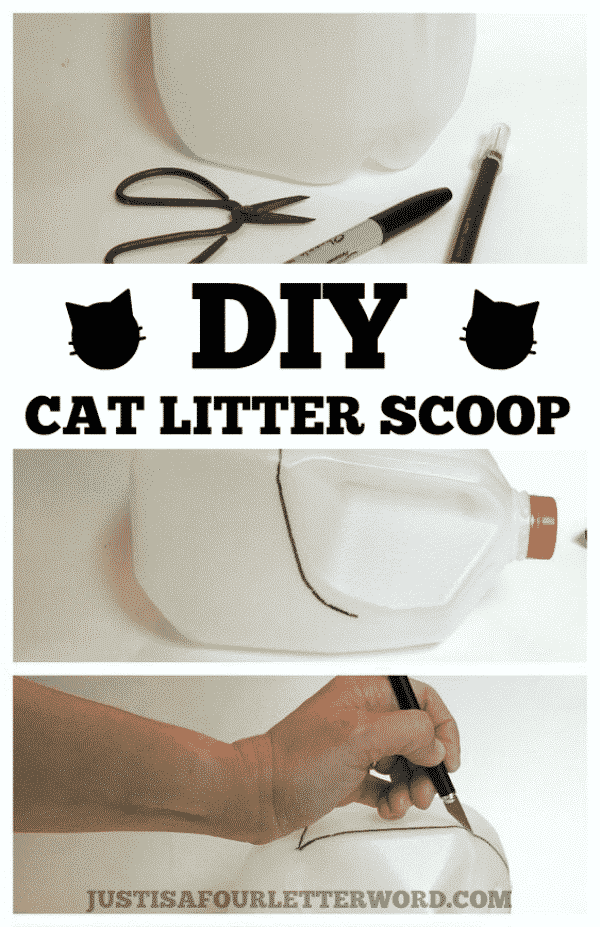 My family and I have 4 dogs and until recently 2 cats. Dogs are a lab boxer mix named Molly, she's 7, a regular sized Chihuahua named Bugsy, he's 12, a teacup Chihuahua named Bella, she's 3 and an Australian shepherd/husky mix named Coco. She's almost 5 months. We had a cat until a week ago named Maxwell, we called him Max. He was almost 14 and we have an 8 month old kitten named Puff. They were all rescue and we live them all!

We have a chaotic but happy home with 10 pets (not counting the fish). 2 rescue fogs that had been in a shelter over a year... Buck and Rusty. We kept their names and they keep us busy! Full run of a 150 acre farm is bliss after acre year in a kennel and 3 failed adoptions. My husband had a cat when we married... Pixel (like heinleins). I had Max and Marie, white feral I took in. Then an adorable stray arrived, soon to be named mama kitty. Oh yes... one kitten was adopted but the rest... daniel, levon, bun qui qui and Bus stayed with us. Happiest social cats ever. They live inside and the dogs out, so litter box duty is a big one. We have a big metal scoop but may try this too since it can hold more at one time. Really big cats go big too, so anything to make it a bit easier. No Sam's near us but the litter sounds great. Appreciate something with natural scents.

Cool scoop idea. Will have to try it when we empty our next milk jug. We have 2 dogs, Bailey and Nellie, and 2 cats, Watson and Penelope. Love all of our fur babies.

So...the litter scoop thing is a bit vague. Can't really see by the pictures where to cut and what are the 3 lines for?

Hey Susan! So you'll just make a line under the handle and cut around the body of the milk jug, making sure to trim off any sharp edges. The 3 lines are on the opposite side of the handle and are used to sift the litter back into the pan. Hope this helps!

Cool scoop! We have a dog named Eva. I forget how old she is daily because she will not grow. I've decided she will be a forever puppy, but I think she is 6. :)

Love the name Eva! Forever puppy sounds perfect to me :)