Forky Asks A Question is likely to be a huge hit for preschoolers with plenty of giggles to be had. Expect to see cameos from other Toy Story pals and lots of silliness from Forky.

If there is one thing I know about Disney fans, it’s that we can all love Disney without loving the saaaaame Disney thing. I have never seen this to be more true that when it comes to Forky from the summer hit, Toy Story 4.

From what I can tell, people either love Forky or they just don’t understand Forky.

I fall into the camp of just not understanding this character and for me, this carries into the new Pixar short series made specially for Disney+ called Forky Asks A Question.

About Forky Asks A Question

Forky, in Disney and Pixar’s “Toy Story 4,” is a craft project created from trash, has important questions about how the world works, such as: What is love? What is time? And of course, the deepest question of all, What is cheese? He explores all of these questions and more in a collection of 10 shorts. 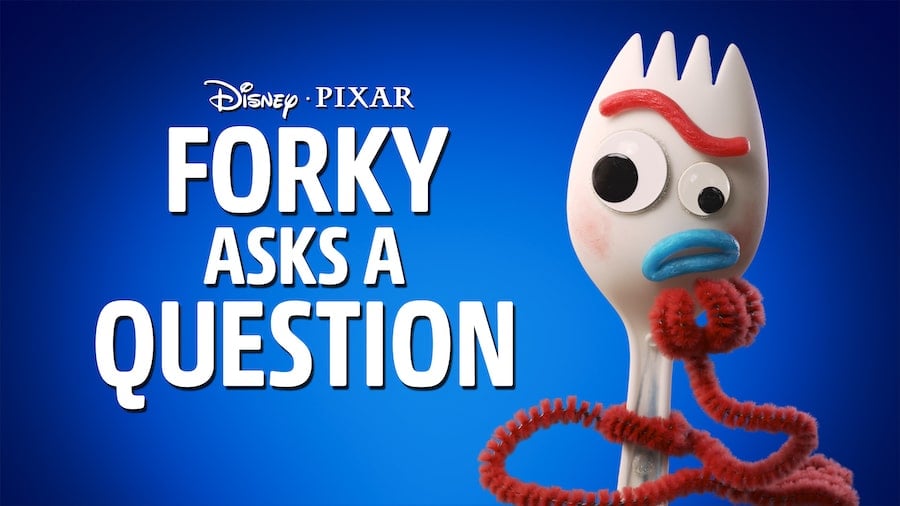 These shorts are likely to be a huge hit for preschoolers/younger children and there are plenty of giggles to be had. Expect to see some cameos from other Toy Story pals and lots of silliness from Forky himself.

That said, there was a bit of a disconnect for me due to the fact that these are three minute shorts with little time to actually answer Forky’s question. Though he does get around to an answer that satisfies him eventually.

To me, the episodes seem perfectly suited to run as little commercials between longer shows on a traditional television channel. It will be interesting to see how my kids react to these because I’m feeling really old over here.

Listen to the Podcast

Like I said in the Now Streaming Disney Plus podcast, I would love to see these re-created in the style of the Goofy shorts of old, where He taught us about sports or other lessons along with some fun and comical animations.

Perhaps they will expand them in the future? Time will tell.

Do you have kids who love Forky? I’d love to hear what they think of this series. Let me know in the comments!

I’m Here for High School Musical: The Musical: The Series
Disney+ Encore! Review
Marvel’s Hero Project Reminds Us That The Kids Are Alright
The World According to Jeff Goldblum is a Gift We Don’t Deserve
Review: The Imagineering Story on Disney+ is Like Going Home
Lady and the Tramp is a Charming Return to an Old Favorite