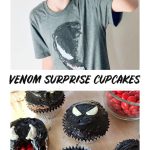 Marvel Venom filled cupcakes are so cute and super fun to make. Everyone loves the surprise inside!

My kids were drawn to Venom the second they saw the first trailer and while they will have to age up a little to see this one, Mom and Dad can watch the movie while they enjoy Venom fever in other ways like wearing fun t-shirts, hats and sweet candy filled cupcakes! Thanks to Sony Pictures for sending us this movie and prize pack to enjoy!

Keep reading for all the details and be sure to stick around til the end!

I’ll be sharing how to make our yummy Venom candy filled cupcakes, which are super simple.

For another cupcake idea, these orange creamsicle cupcakes from scratch are adorable! 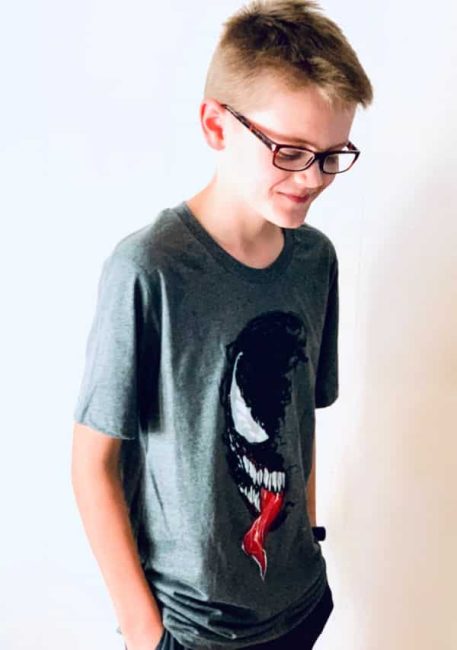 What is Venom About? 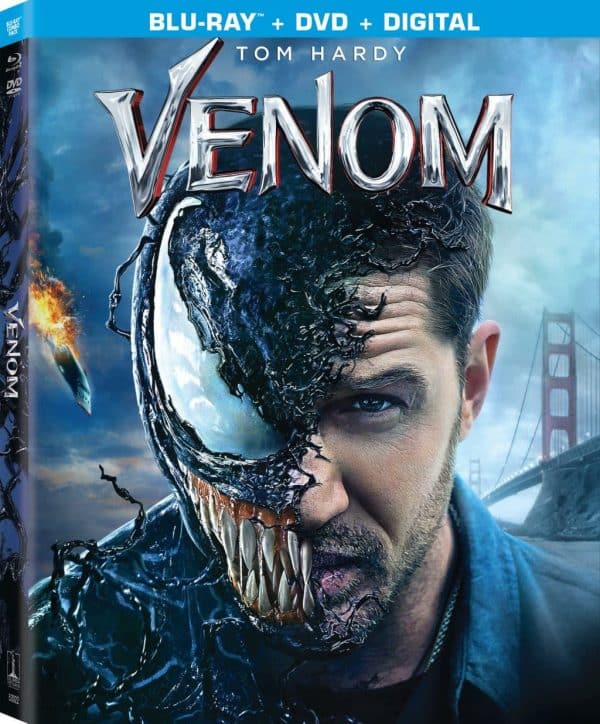 Synopsis: Eddie Brock (Tom Hardy) is a broken man after he loses everything including his job and fiancée. Just when his life is at its lowest, he becomes host to an alien symbiote which results in extraordinary superpowers – transforming him into Venom. Will these powers be enough for this new lethal protector to defeat great evil forces, especially against the far stronger and more weaponized symbiote rival, Riot?

Watch the trailer below if you haven’t yet seen the movie. If you have, feel free enjoy it anyway.

One of the best parts of buying a film rather than streaming it is all the amazing bonus content. And boy does Venom have bonus content! Check out all of these extras. I can’t wait to watch them all!

Venom Mode: When selecting this mode the film will engage informative pop-ups throughout the film to provide insight on the movie’s relationship to the comics, and to reveal hidden references that even a seasoned Venom-fan may have missed!
Deleted & Extended Scenes: These deleted and extended scenes will give fans even more of the Venom action they loved in theaters!

From Symbiote to Screen: A mini documentary about the history of Venom in comics and his journey to the big screen. Interviews with Avi Arad, Matt Tolmach, Ruben Fleischer, Oliver Scholl, and Director and Comic Fanboy Kevin Smith.
The Lethal Protector in Action: Go behind the scenes with the production crew and learn the secrets behind the awesome Motorcycle stunts, wire stunts, and drones.
Venom Vision: A look at how Ruben Fleischer came to the project, gathered his team, and made Venom a reality. Utilizes interviews from cast, crew, and producers as well as Fleischer himself.
Designing Venom: Designing and creating Venom meant a huge challenge for VFX artists; follow the amazing journey.
Symbiote Secrets: Blink and you may have missed it! Enjoy the hidden references throughout the film.
8 Select Scenes Pre-Vis sequences: See the progression of the visual effects, storyboards and fight chorography compared to the finished film.
Music: “Venom” by Eminem – Music Video
“Sunflower” by Post Malone, Swae Lee (From Spider-Man: Into the Spider-Verse)
Spider-Man: Into the Spider-Verse Sneak Peek: Meanwhile in another uni 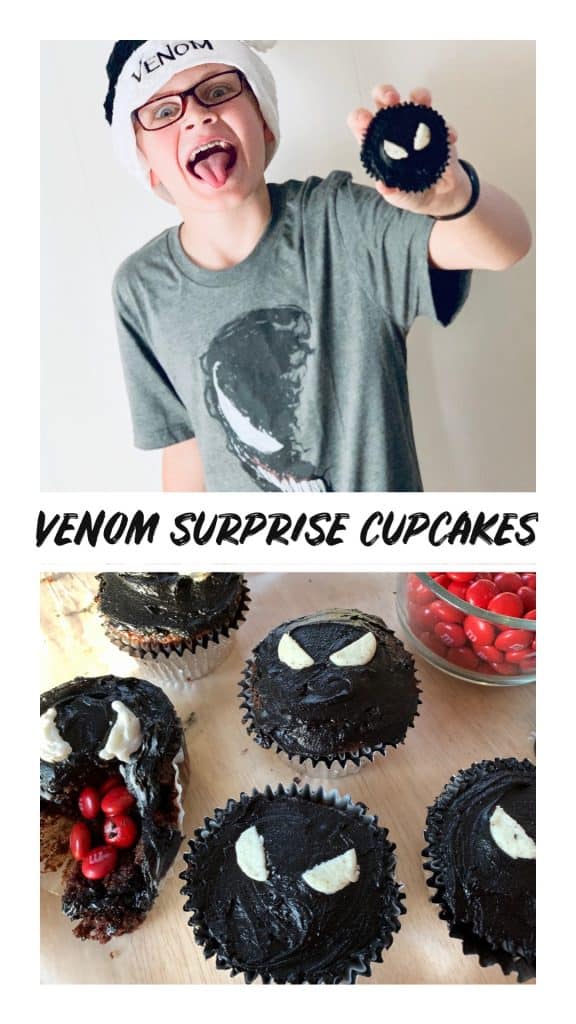 Because the folks at Sony Pictures packed in so much bonus content, I decided to give you a little bonus content of my own. Y’all know I never need much of an excuse to play with my food!

My boys are both under 10 so we’re holding off on sharing the Venom movie with them. But that doesn’t mean there isn’t fun to be had, which is where my idea for these candy filled cupcakes was born. 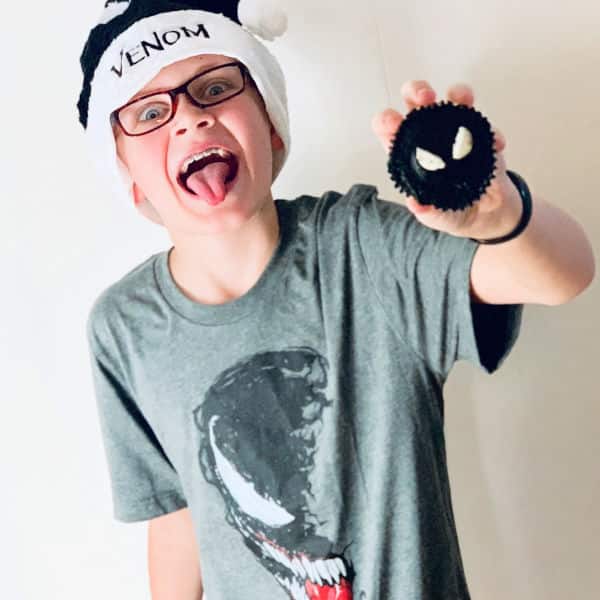 Candy filled cupcakes are surprisingly easy to make and I couldn’t think of a better treat to go along with this movie.

Venom’s iconic red tongue is unmistakable, so I filled my cupcakes with red chocolate candy and frosted the tops with black icing. Biting into the cupcake gives a fun surprise and I like to think it’s a little tribute to this iconic comic book character. 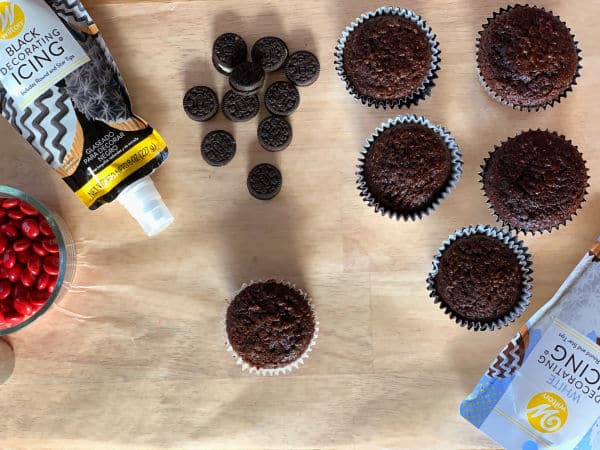 To fill your cupcakes, use a small circular cookie cutter to remove the center of the cupcake. You’ll need to keep the piece you remove to add back to the top once the candies are in, so set it aside while you add the candy.

Then, slice off the excess cake so the circle is level once you put it back on. 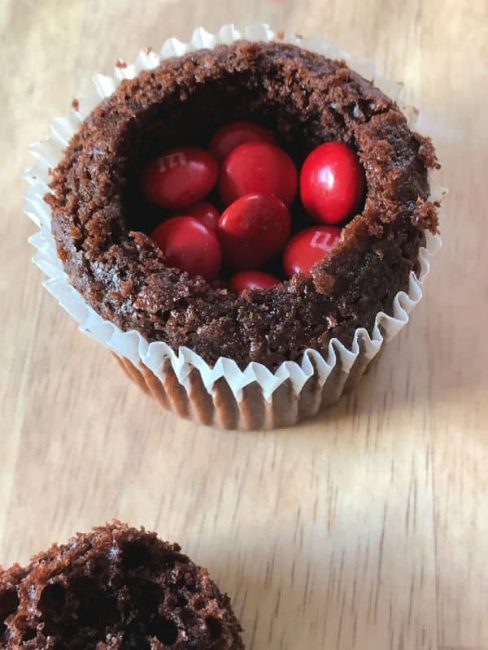 Once this is done, you’re ready to frost! Making black icing from scratch is pretty tricky so I recommend buying black icing instead. You don’t want it to end up with a purple Venom! Save that color for Thanos. 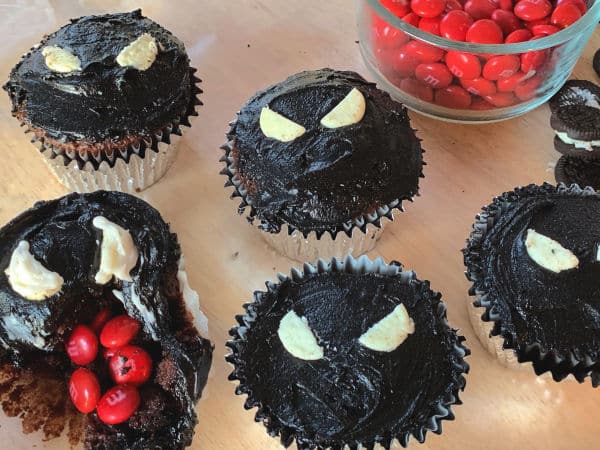 I tried a few different techniques for Venom’s eyes and decided that the inside of a mini chocolate sandwich cookie sliced in half was perfect! This was the easiest way to have a uniform look for all the cupcakes.

I opened the cookie and carefully removed the creme filling by sliding a butter knife underneath, keeping the circle intact. Then I sliced it in half and boom, eyes!

That’s it! You’re ready for a delicious Venom Movie party. 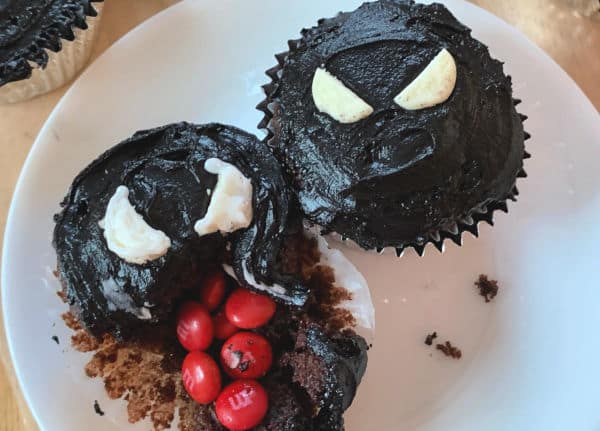 Want to win your own copy of Venom on Blu-Ray and a sweet Venom tee for your kiddo? Of course you do!

To enter for a chance to win Venom on Blu-Ray and a Venom t-shirt (size Adult Small), leave a comment on this blog post and let me know if you’re done with your holiday shopping or your fave gift. That’s it!

Entries accepted until January 1, 2019 at 11:59pmET. One winner will be chosen on January 2, 2019 (wow!) and notified via email. Please reply within 48 hours or I will have to choose someone else. Other than that, US entries 18 and older only please. Good luck!

VENOM has a run time of approximately 112 minutes and is rated PG-13 for intense sequences of sci-fi violence and action, and for language.

My fave gift for this Xmas was a new mountain dulcimer I bought for myself.

The laptop I received is my favorite gift.

My favorite gift was an instant pot.

My favorite gift was my comfy new robe.